Last week, Apple released iOS 7 Beta 1 for iPhone to developers. At the same time, it released a new beta for the Apple TV as well.


Users of the Apple TV beta have discovered at least two new features inside. AppleInsider notes that Apple built an iTunes Radio client for the Apple TV -- something that Eddy Cue mentioned during the WWDC Keynote and that Apple has promoted to potential iTunes Radio advertisers -- with in-line video advertisements.

Apple has also added a 'Conference Room Mode' for use in business and academic settings that displays simple instructions for connecting to a Wi-Fi network and sending data from both a Mac or iOS device. 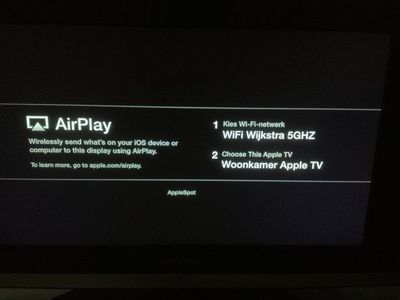 The final version of the Apple TV Beta software should be released alongside iOS 7 in the fall.

santydolby
Apple TV AirPlay working over enterprise WiFi would and should kick the rear of all those truck-heavy projectors with their clumsy settings, sorry resolutions, and infinite cords. High time!
Score: 16 Votes (Like | Disagree)

No network needed!
Would instantly buy 65-75 Apple TVs if they had the mythical Airplay Direct feature.
Score: 8 Votes (Like | Disagree)

DavidLeblond
One of the conference rooms here has an Apple TV... I'm not sure which one, it always shows up on my Airplay list. Ooooo trust me it has been very tempting to screw with...
Score: 6 Votes (Like | Disagree)

Mike Oxard
The conference room display mode could be quite nice to use in a guest bedroom.
Score: 5 Votes (Like | Disagree)

Or in hotel rooms.

Sunday July 3, 2022 8:07 pm PDT by Sami Fathi
While past rumors have indicated the upcoming second-generation AirPods Pro will feature a built-in heart rate and body temperature sensor, Bloomberg's Mark Gurman has cast doubt on those rumors turning out to be true, saying instead such a feature is unlikely to come anytime soon. "Over the past few months, there have been rumors about this year's model gaining the ability to determine a...
Read Full Article • 74 comments

Monday July 4, 2022 5:50 am PDT by Hartley Charlton
Apple is working on an Apple Watch Series 8 model with a larger display, according to DSCC's Ross Young and Haitong International Securities's Jeff Pu. In October last year, Young suggested that the Apple Watch Series 8 could come in three display sizes. Now, responding to a query about the rumor on Twitter, Young claims that the additional display size joining the Apple Watch lineup will be ...
Read Full Article • 198 comments