Verizon today became the first of the major U.S. iPhone carriers to report financial results for the second quarter of 2013, revealing during its conference call that the carrier activated approximately 3.9 million iPhones during the quarter. The number represents a little over half of Verizon's 7.5 million total smartphone activations during the quarter and is up approximately 44% from the year-ago quarter.

The 3.9 million iPhone activations on Verizon also topped analyst expectations in the range of 3.5 million.

Verizon also reported that it has essentially completed rollout of its 4G LTE network, covering 99% of its 3G footprint with LTE. The carrier's LTE network now covers 301 million people, or 95% of the U.S. population, in over 500 markets. That LTE network is also now handling 59% of Verizon's total data traffic, with 33% of postpaid customers currently using LTE-compatible devices. 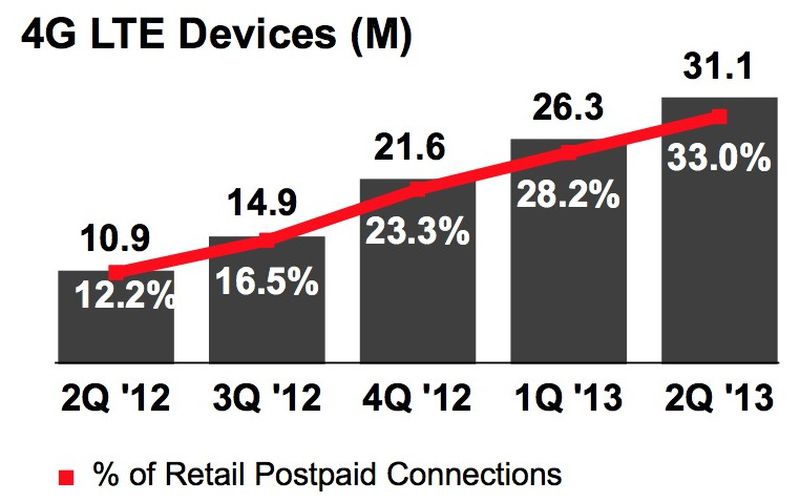 Finally, Verizon announced that 64% of its postpaid customer base is now on smartphones, up from 61% at the end of the previous quarter.

Apple will announce its quarterly earnings next Tuesday, July 23.

M-O
The other 49% went in to buy an iPhone but were attacked with droids at the door and beaten senseless by Verizon employees until they finally gave in.
Rating: 7 Votes

Klae17
So... Are they having a hard time selling those iPhones or...?
Rating: 5 Votes

Elvergun
Imagine how many more iPhones Verizon would have moved if sales reps had not steered customers away from Apple products by convincing people to buy an Android instead.
Rating: 2 Votes

Technarchy
No one wants a 4" screen...Isn't that the mantra of the Apple trollers?
Rating: 2 Votes

You could say the same thing about Android and big screens. As in ... people don't buy Android because they like it, they buy it because it's cheaper.

The truth is probably somewhere in the middle as everyone has different priorities in their choices. Whichever phone hits on more needs/wants gets the sale.

Apple goes at it differently than other vendors. Apple builds one phone that hits what they feel is the sweet spot. Samsung, et al builds many different models that hit on all sorts of features (screen size, build quality, price) and cover their bases that way.

Neither one is the correct way as they're both achieving the objective they set out to accomplish. Apple wants to sell enough iPhones to make gobs of money and make sure there are enough users to keep the platform relevant. Samsung wants to take the market share title and make gobs of money through sheer volume. They're both winning ... at the expense of everyone else.
Rating: 1 Votes

Unless I get a 10% increase in thumb length I am perfectly fine with 4" iPhones.
Rating: 1 Votes

No one wants a 4" screen...Isn't that the mantra of the Apple trollers?

/for i(diots)Critics because no matter what for as long as it is not about new iGadgets announcements.

Wow that LTE rollout was a lot faster than I expected! Good to hear for when I upgrade my 4S, Verizon 3G sucks.


Yes their 3G sucks. Their LTE is wildly inconsistent. Some (most) places (I traveled this summer - Central FL to NH coast) get what AT&T users were getting on the 4S. But some spots (the bigger cities) it is pretty fast.

In any event, overall it is a decent speed, miles ahead of their 3G
Rating: 1 Votes

It said iOS devices....lots would be iPads


Valid point. My mistake. Howeve, isnt the point still the same. iPads are slowing in sales as well according to the reports. I think the only thing the reports have said are increasing is the iPad mini. But could they be selling that many mini's to make up for all the losses that are reported in all other idevices? So my point is that in the end it seems to me the reports were wrong and that Apple is selling a more than what people think (at least in the USA). But the truth will be known in a week with the Apple Quarterly result.
Rating: 1 Votes
[ Read All Comments ]