Apple's patent, titled "User-Specified Route Rating and Alerts," shares some distinct similarities with Waze, a company that Apple was rumored to be purchasing at one point, though it was ultimately acquired by Google. The patent, which was originally filed in 2011, details a system in which Maps users offer "ratings for routes, streets and/or locations," improving the company's mapping capabilities through user feedback. 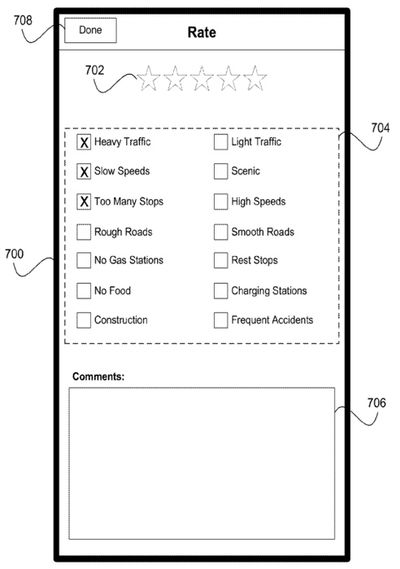 Waze incorporates user feedback as well, using crowd sourced data to determine route details and travel times. Waze users can utiize the app's feedback system to provide the company with reports on traffic accidents, road closures, location accuracy, and more. With a similar system in place, Apple could allow its users to provide feedback and ratings on route choices, which could then be used to optimize travel.

Apple's patent also details a process that would see the company collecting real-time traffic alerts and then distributing it to other Maps users, providing on-the-fly updates to routing information.

After a disastrous Maps debut alongside iOS 6 that saw a slew of complaints about inaccuracy and missing information, Apple has worked hard to improve the application. Tim Cook issued an apology and the company went through a restructuring that included the termination of several people involved with the Maps project, including SVP of iOS Software Scott Forstall and Maps manager Richard Williamson.

Apple has since posted a number of job listings in order to add to its Maps teams, and has improved 3D flyover coverage in a number of cities. Both of Apple's upcoming operating system updates for Mac and iOS will include a number of mapping improvements, including a new app in OS X Mavericks.

Marrakas
So basically they are copying waze and patenting it?
Score: 16 Votes (Like | Disagree)

Or you could just use Google Maps...which actually works.

Except when it doesn't.

Seriously, Google Maps has plenty of flaws. On numerous occasions it has been off by a block or two. Sometimes more. And I can recall at least two times where it told me to take a path that did not exist.
Score: 13 Votes (Like | Disagree)

e-coli
Or you could just use Google Maps...which actually works.

In all fairness, crowd sourcing this isn't a bad idea. I do it for DarkSky. But to think people will do it while driving seems unsafe.
Score: 13 Votes (Like | Disagree)

WatchTheThrone
Should of just bought Waze.
Score: 12 Votes (Like | Disagree)

HiVolt
Oooh, such an interesting "technology" that it requires a patent? wow...

When is the patent office gonna stop giving out patents for obvious ideas?
Score: 11 Votes (Like | Disagree)

phuocsandiego
Seriously? I certainly hope the USPTO turns this down on grounds of being way too obvious. Our patent system seriously needs to be completely revamped.
Score: 9 Votes (Like | Disagree)
Read All Comments