At today's WWDC keynote, Apple introduced a new Maps app for the Mac. The app, which is similar to the iOS version, supports Flyover and points of interest. Users can add directions and locations to their bookmarks, which can then be sent directly to the iPhone as the two apps are able to sync with one another. 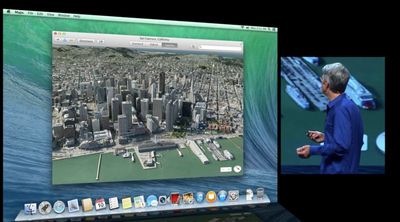 Apple is also planning to bring iBooks to the Mac with a new dedicated app. On stage, Craig Federighi demoed textbooks in the new iBooks app on the Mac, showing full screen videos and demonstrating the note taking capabilities of the app.

The app incorporates study cards that are drawn from notes taken while reading, in order to facilitate better studying habits. Both of the new apps will be available with the release of OS X Mavericks. Mavericks will be available for developers today and will be released for the general public this fall.

The most annoying part about it are the sheep that clapped about iBooks. Again, there is no reason why this shouldn't have been here all along.


Maybe that's why they clapped? I've been wanting it since I don't think I can stand reading a book on an iPhone long term. I hope reading on a 13" MBP will be pleasant.


Apple fans that are wanting to stay in the Apple ecosystem. When I'm at home I've looked up stuff on Google Maps and then had to search again on Apple's Maps when I'm in my car. Being able to sit at home, plan my stuff, have it sync with iCal (Calendar??), then just push it all to my iPhone makes everything so much nicer. I'm not sure if you can do that with Google Maps, maybe if you have an Android device.
Score: 8 Votes (Like | Disagree)

GoCubsGo
The most annoying part about it are the sheep that clapped about iBooks. Again, there is no reason why this shouldn't have been here all along.
Score: 4 Votes (Like | Disagree)

Deep OS integration. Apple aren't just interested in showing maps; they're interested in using this information throughout the OS. For example, the new Calendar integration that automatically shows you the travel distance by car or foot to whatever you've added in it. Or the new OS X feature to share the driving directions to someone's iPhone on the road via iCloud. Google Maps hasn't got a clue on how to do that.

While Google Maps does have a public API, I doubt they're willing to support the rather large user base of OS X with API access. It's not really the intention with it.

Because Apple now has an own map service, they're free to use it however they wish. We're only now starting to see the fruits of this effort; I'm sure there is more to come in the future. It's being used for non-obvious things too, such as the new automated "moments" display in iOS 7. It uses the geographic metadata to map the coordinates to locations in their map service (reverse geocoding).
Score: 3 Votes (Like | Disagree)

I sent a bitchy e-mail to Tim Cook quite some time ago complaining about the ridiculous situation where you could buy an iBook on a Mac, but not read it. There you go - he listened to me! Ha ha.

Well, obviously, they do have a clue as to how to do that; they already do that and more, just on Android devices. Android devices can not only send maps to phones, they do it automatically if you have Google Now, along with offering turn by turn navigation as soon as your phone starts moving. It's really already way beyond what Apple is offering.


Why is every other post on this thread one simultaneously bragging about a feature another company has and at the same time complaining that Apple added it?

Is there some rule that only the first person to have something can ever have it that I'm not aware of? Are we all patent trolls now?

Personally, I'm glad when Apple adds things that others have that are nice. No one (rational) is saying that Google doesn't have good stuff. And, please, it's not like everyone hasn't borrowed a thing or two from Apple....
Score: 2 Votes (Like | Disagree)

What about Newsstand? I'd like to read my mags on my macs too
Score: 1 Votes (Like | Disagree)
Read All Comments

Sunday May 15, 2022 6:14 am PDT by Sami Fathi
iOS 16 will include new ways of interacting with the system and some "fresh Apple apps," Bloomberg's Mark Gurman has said, offering some more detail on what Apple has in store for the upcoming release of iOS and iPadOS set to be announced in a few weeks at WWDC. In the latest edition of his Power On newsletter, Gurman wrote that while iOS 16 is not likely to introduce a major face-lift to...
Read Full Article • 184 comments