While iOS apps like Evernote and Instapaper are able to provide users with in-app auto-renewing monthly subscriptions for services, the same functionality is not available in the Mac App Store at the current time.

For example, Evernote is able to offer a renewable monthly subscription to its premium service via iOS, charging $5 per month. On the Mac App Store, however, Evernote cannot offer a subscription, instead requiring users to sign up each month or purchase a year of service in advance.

As 9to5Mac notes, that is set to change in OS X Mavericks, with the introduction of Auto-Renewable Subscriptions for Mac Apps. 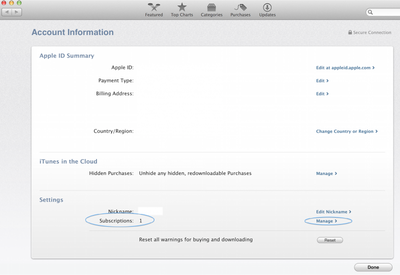 With the release of Mavericks, Mac developers will be able to provide services on an ongoing monthly basis with charges routed through the App Store's in-app purchase system. As with the iOS App Store, developers will be able to offer both ongoing subscriptions and subscriptions that expire after a set time, automatically charging a user's iTunes account.

Mac App Store subscriptions in Mavericks will be managed in the Mac App Store's account information panel, which has been updated with a new subscription management setting.

OS X Mavericks was previewed at Apple's Worldwide Developers Conference in June. It is currently available for developers, and is expected to be released to the public in the fall.

ArtOfWarfare
How about supporting paid updates? I know some developers like Microsoft and Adobe aren't so fond of those, since they require adding useful, pay worthy features to existing apps, thus why they're moving to subscription models, but they're relatively popular with consumers, I think.

IE, if I want to majorly improve an app right now, my options for funding that are:

#1 - Don't. Everyone gets a free update and I go broke.
#2 - Sell it as an entirely seperate app. Many consumers won't discover it ever.
#3 - Charge subscription fees. Annoying to users who feel they're paying repeatedly for something I did once.
Score: 11 Votes (Like | Disagree)

appleguy123
Good for companies, not so good for consumers.
Score: 9 Votes (Like | Disagree)

It's just a matter of time before Apple starts subscription-based plans itself. As a user of many Apple software, I personally would welcome the move. But those using just a few would probably hate it.


Either you work for Apple, or simply love giving them more and more of your money. :D
Score: 5 Votes (Like | Disagree)

monkeybagel
Hmmmm... All we need is another way for software companies to encourage subscriptions instead of perpetual licenses.
Score: 4 Votes (Like | Disagree)

3282868
I'm still in disbelief with Adobe's move to subscription based app's. Not so much for monetary reasons, but the concept of "renting" applications doesn't sit well. I thought it may be to deter pirating, but I've already seen some download the app's and use the well known hosts modifications.

How about supporting paid updates? I know some developers like Microsoft and Adobe aren't so fond of those, since they require adding useful, pay worthy features to existing apps, thus why they're moving to subscription models, but they're relatively popular with consumers, I think.

IE, if I want to majorly improve an app right now, my options for funding that are:

#1 - Don't. Everyone gets a free update and I go broke.
#2 - Sell it as an entirely seperate app. Many consumers won't discover it ever.
#3 - Charge subscription fees. Annoying to users who feel they're paying repeatedly for something I did once.


I agree completely. There also needs to be a way to sell educational discounts on an individual basis.
Score: 3 Votes (Like | Disagree)
Read All Comments