Rolocule, which debuted its Rolomotion concept back in April, has launched its first game that uses the technology. The Rolomotion software is designed to convert an iPhone or an iPod touch into a motion controller, similar to a Nintendo Wii Remote.

The first game to use the technology, Motion Tennis, hit the App Store this morning. Motion Tennis is meant to be played on the Apple TV using AirPlay Mirroring, where it takes advantage of the iPhone’s gyroscope, magnetometer, and accelerometer to detect movement and translate the movements on screen. Like with the Wii Remote, the iPhone serves as a racket in Motion Tennis. 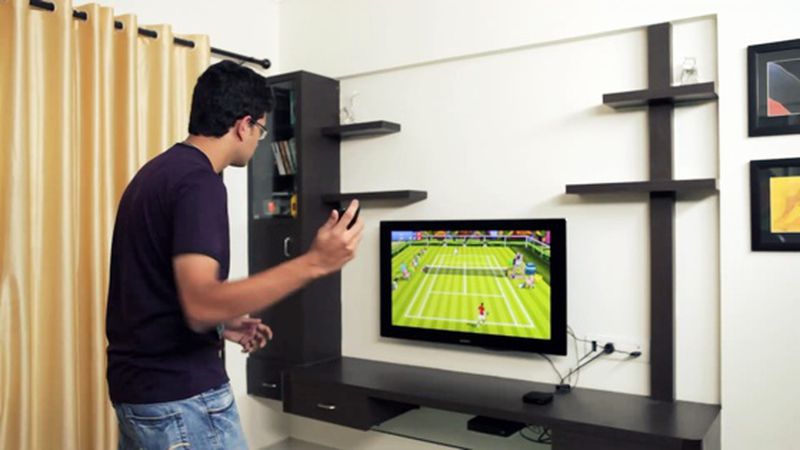 Motion Tennis should only be purchased by users with an Apple TV with AirPlay functionality, as the game does not work on its own. It plays similarly to the Tennis game in Wii Sports (it is, however, less polished), and although there is some slight lag, the game is responsive to the phone’s movements.

Key Features:
Swing like a Champion: Get the real feel of tennis as you swing real forehands and backhands by swinging your iPhone/iPod Touch and taking control of your player on TV.

Hitting glory: Hit multiple shots like the groundstrokes, slice and lob, and simultaneously give accurate direction to the ball, just like in real tennis.

Multiplayer: Team up with friends and family by connecting two iPhones wirelessly and play together as doubles partners to beat the opponents.

The new home of tennis: Choose between Grass, Clay or Synthetic courts along with four difficulty levels to become a tennis master.

Tennis Survivor: Think you can survive this continuous onslaught? Play the survival mode where you cannot make even ONE mistake. Get a highscore and compete in Online leader boards.


The game requires an iPhone 4S, an iPhone 5, or a 5th Generation iPod touch running iOS 6 to play. It also requires a second or third generation Apple TV for AirPlay Mirroring.

Motion Tennis can be downloaded from the App Store for $7.99. [Direct Link]


Am I missing something?

I think the assumption is that you already have the iPhone and atv.
Rating: 5 Votes

A cool concept but lag while using airplay means this isn't going to be a real fun game.


You should try the game and see if there is lag before claiming there will be, don't you think?

I think this is a neat direction for games and if it works well, $7.99 a game isn't bad.
Rating: 5 Votes

Oh come on. This app is clearly geared toward existing iPhone and iPod touch owners. They may need to shell out $100 more for Apple TV (and $8 for the game), but that is still cheaper than buying a new console.

Having said that, $8 seems rather expensive for a simplistic tennis game. I suppose it is priced as such given Apple TV requirement (smaller market). The developer should provide a free version to demonstrate it is playable for those with such setup.
Rating: 3 Votes

You should try the game and see if there is lag before claiming there will be, don't you think?

I think this is a neat direction for games and if it works well, $7.99 a game isn't bad.


Are you serious? Airplay lags. This game will be no different. You'll just have to time your shots accordingly.

I wonder how many TV's will be ruined by flying iPhones?!?!
Rating: 3 Votes

Smith288
They could make a killing on a cushion case and before each game display an annoying reminder to apply the case and strap to your wrist.
Rating: 3 Votes

Can you play it with an iPad? WHOOMP.
Rating: 3 Votes

And even that's assuming you don't own either an Apple TV or iDevice already and that all App Store games cost $8.
Rating: 2 Votes

aristotle
I have to say that 8 buck is a couple of lattes and I absolutely hate freemium. Freemium must die.
Rating: 2 Votes