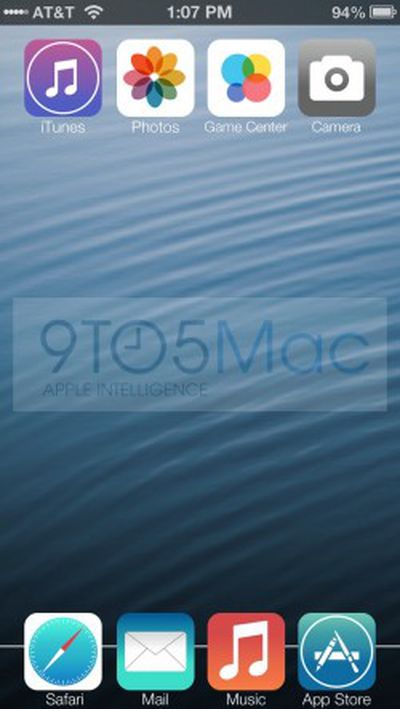 9to5Mac reports that it has "been given a quick peek" at an early beta version of iOS 7, and while the report's source would not allow screenshots to be posted, 9to5Mac is able to share a description of the new design and has created a mockup (at right) highlighting some of the main features. Among the details:

- Skinny font as seen on the iOS 7 banner at WWDC.

- Carrier signal in status bar changed to five white/gray dots instead of bars.

- Separate black and white themes for each app, although it is unclear how they will be implemented.

We’re not sure if they are A/B decoys, if white iPhones and Black iPhones will have their own color schemes or as someone else suggested, the different color schemes might be invoked by the amount of ambient light or the time of day. [...]

When in “Black mode”, the keyboard is black with gray letters. In “white mode”, gray keys with white letters – a little like Android.

- "Share" menu now scrolls sideways with one row dedicated to AirDrop sharing to other devices and a second row dedicated to services such as Facebook, Twitter, and the rumored Flickr and Vimeo integration. A third row supports system functions like print, copy, and "use as wallpaper".

Apple will be showing off iOS 7, as well as OS X 10.9, at its Worldwide Developers Conference keynote scheduled for later today. While the company should begin seeding versions of iOS 7 to developers today, a public launch is not expected until later this year alongside new iPhone hardware.

maflynn
I'm not sure I like what I'm seeing but I'll withhold my judgement until the keynote
Score: 47 Votes (Like | Disagree)

This is what we don't want iOS 7 to look like.

InTheUnion
I would take that image with a very large serving of salt.
Score: 32 Votes (Like | Disagree)

irfaanfaki
brace yourself, iveOS 7 is coming
Score: 21 Votes (Like | Disagree)
Read All Comments