Apple to Begin Ramping Up Production of 25-33% Lighter iPad in July?

Digitimes reports that Apple will soon begin trial production on its fifth-generation iPad, with full production said to be planned to begin in July. Based on that schedule, Apple could hit monthly production of 2-3 million units by September as it prepares to launch the updated version of its full-size tablet. 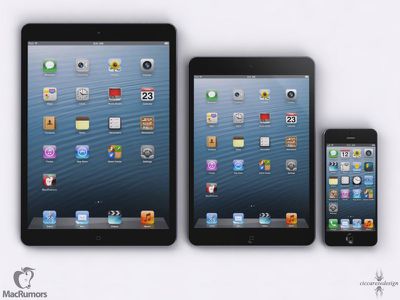 Mockup of iPad 5 next to iPad mini and iPhone 5
As with a number of previous rumors, the report claims that the new iPad will be narrower, thinner, and lighter than the current design, taking a number of design cues from the iPad mini. As a result, Digitimes says that the new iPad will be 25-33% lighter than the current models, in line with previous claims from KGI Securities analyst Ming-Chi Kuo.

The display of the new iPad, which will hit market shelves as early as September, will still be a 2,048 x 1,536 Retina display, the same as the one used in the 4th-generation model, except that the new display is built on a glass substrate of 0.2mm, thinner than the 0.25mm one for the 4th-generation device, the sources said, adding the new table will has a narrow bezel.

The new iPad will use one LED light bar for backlighting, compared to two LED light bars used in 4th-generation iPad, the sources noted.

Kuo had previously predicted that production on the new iPad would ramp up in August or September, with shipments following soon thereafter.

Rumors of an iPad mini-like design for the next-generation iPad have been supported by leaked photos showing what was claimed to be the front bezel and cover glass for the device, as well as photos of the device's rear shell and cases said to be based on the product's design.

Previous rumors have also suggested that Apple would be able to use more efficient backlighting in the fifth-generation iPad, reducing the device's size both directly through eliminating one of the two backlight units and indirectly through allowing for a smaller battery.

syndalis
Bring on the Mini 2

As nice as this all sounds, the original iPad is mostly dead to me.

the Mini is the perfect balance of form and function; bring on the next generation mini with a retina screen and comparable battery life.
Score: 9 Votes (Like | Disagree)

but but but steve jobs said the ipad was the perfect size?!?!?! :confused:

He also said that it was magical how you could hold it either way and that there was no real difference in how it was held.

The moral of the story is that The Steve would say anything to rake in the bucks. Honestly - why would anybody believe a word he said after he claimed to be sterile? He wanted to save a few bucks, and so he allowed his illegitimate daughter to be raised on welfare.

That is despicable in my book.

But to be fair, he was a very effective corporate CEO. If you adulate capitalists, then he is a great one. He's right up there with John D. Rockefeller, Andrew Carnegie and Cornelius Vanderbilt. Nobody knew how to turn a buck like Steve Jobs.
Score: 5 Votes (Like | Disagree)

I know this is sarcasm, but yes indeed it is innovative. Such a high resolution display with such performance, battery life in such a thin and light device is truly innovative. Just look at all the Samsung, Sony and Google tablets out there, they are inferior on all those aspects.

While I agree that Android devices are coming close to iOS devices quality wise, I do think that event the current iPad is still way ahead of the competitors.
Score: 5 Votes (Like | Disagree)

spiderman0616
I have a 3rd gen iPad and just bought my wife an iPad Mini. I will be sitting on the sidelines for this next upgrade cycle, unfortunately. But go Apple! People are going to love this new design.
Score: 5 Votes (Like | Disagree)
Read All Comments