Networking company Sandvine has released a new report that breaks down North American iTunes traffic on fixed networks, examining how iTunes customers are using the service. Surprisingly, the largest portion of iTunes traffic is not generated from streaming, but from the App Store.

Direct App Store downloads account for 38.1% of total iTunes traffic, while 36.15% of traffic comes from iTunes streaming, which includes movie and song previews, along with iTunes Match.

With iTunes Match, customers can stream music and video purchases to both mobile devices and Apple TVs. Apple's streaming traffic may increase in the coming months with the introduction of iRadio, the company's rumored streaming radio service. 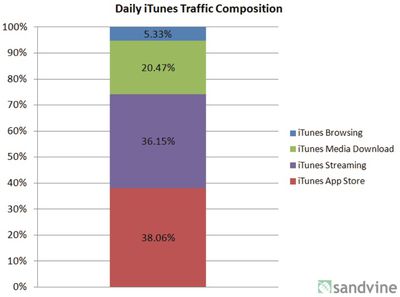 Media downloads, which are non application purchases such as music, movies, and books make up the third largest portion of iTunes traffic at 20.47% and the final 5.33% of traffic is generated from iTunes Browsing as users visit various App Store and iTunes pages.

As Tim Cook noted in Apple's Q2 financial results call, iTunes has been experiencing phenomenal growth with record quarterly billings of $4 billion. Apple's App Store is nearing 50 billion downloads and has paid out more than $9 billion to developers.

Sandvine's report also points out that Apple manufactured devices generate 35% of all streaming audio and video on fixed access networks, with the iPad generating the most traffic at 10%.

To generate its report, Sandvine examined a cross-section of customer data, gathered over a one-month period and compiled a 24-hour profile of each network normalized by the number of active subscribers at each hour of the day.

Doomed. Why do they keep trying? /s


Do you guys seriously still think you're funny with the sarcastic "doomed" crap? It's been done in almost every thread for months.
Score: 8 Votes (Like | Disagree)

between netflix, youtube, spotify and cable channels streaming their content there is no reason to buy anything on itunes except for apps

but i do rent a few movies a month


Sounds great, until you're on a plane, or out on the water in a boat, or camping or biking deep in the woods. You know, places where there isn't a constant internet connection. Maybe I'm old fashioned, but I like MY music, and if I like a new song, I buy it. Then I can listen to it forever. I added up all my music purchases from iTunes over a year and it was less that a year's subscription to Spotify. Each year my collection grows and one day, when I'm officially too old to like ANYTHING new, I can pay nothing and listen to the songs I like while out on a lake in the middle of nowhere.
Score: 3 Votes (Like | Disagree)

Do you guys seriously still think you're funny with the sarcastic "doomed" crap? It's been done in almost every thread for months.


Thank you. It's became annoying always seeing that in the first few comments on most threads.
Score: 3 Votes (Like | Disagree)

They're different things. iRadio is something like Pandora. Probably will be nothing new, but it'll work with iTunes and iPhone, so I'll be happy.
Score: 2 Votes (Like | Disagree)

Do you guys seriously still think you're funny with the sarcastic "doomed" crap? It's been done in almost every thread for months.