DigiTimes claims that Apple will begin volume production of the 5th generation iPad in July-August 2013. The timeline reportedly comes from sources in Taiwan-based supply chain makers. 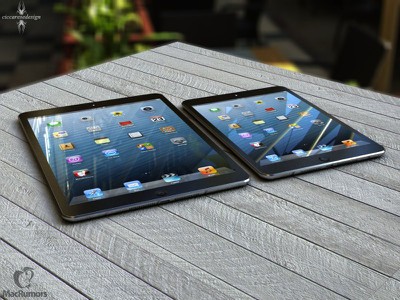 Mockup of 5th Generation iPad next to an iPad mini
A July-August ramp up of production runs counter to many of the earlier rumors that had suggested the iPad launch as early as April.

While Apple's traditional timeframe for iPad launches has been in the first few months of the year, last year saw two iPad launches -- one in March, and one in November. The late 2012 release of the 4th Generation iPad may have altered that usual timetable.

The new iPad is believed to be "thinner and lighter" than the currently shipping full-sized iPad. The 5th Generation iPad is also believed to take on the same thin-bezel design as the iPad mini. The above mockup is based on leaked iPad 5 enclosures from early this year.

ChrisTX
I always looked forward to purchasing a new iPad this time of year. I'm not a fan of Apples entire product portfolio being released in the fall. :cool:
Score: 11 Votes (Like | Disagree)

But, again, if all they'll do is make it thinner and lighter and give it a slate back than I really don't bother waiting 1/2 years. It's all the same

clibinarius
Been waiting all year. Apple's successfully "mixed it up" regarding expectations of any products.

And last year everyone mocked the secrecy thing. I haven't seen too many rumors about the next iphone, either, or this thing's features aside from a new case.
Score: 10 Votes (Like | Disagree)

...which doesn't make a lot of sense given that the last truly new iPad was introduced one year ago. But, again, if all they'll do is make it thinner and lighter and give it a slate back than I really don't bother waiting 1/2 years. It's all the same


Complete redesign but its still all the same :confused:.
Score: 8 Votes (Like | Disagree)

Lancer
Call me when the next Mini goes on sale.
Score: 6 Votes (Like | Disagree)
Read All Comments