Friday March 29, 2013 9:01 am PDT by Eric Slivka
Apple has long had a partnership with Best Buy for dedicated "Apple Shop" sections in many of the electronics retailer's stores, but a new report from Geek.com indicates that those Apple Shops will soon be joined by similar Samsung shops, with the upcoming Galaxy S4 launch serving as the impetus for the first round of store rollouts.

Geek.com has been told that the first wave of high traffic Best Buy locations will soon be receiving instruction to remove two aisles next to their mobile department and prepare to install a new Samsung store. This new section will be dressed in large Samsung signage and offer custom demo stations for many of Samsung’s products. Locations with the new section will be issuing special training sessions for employees in the mobile department, focusing heavily on how to show off Samsung-specific features.

The report indicates that the Galaxy S4 will be the featured attraction of these shops, although Samsung's full line of smartphones and tablets will be on display. 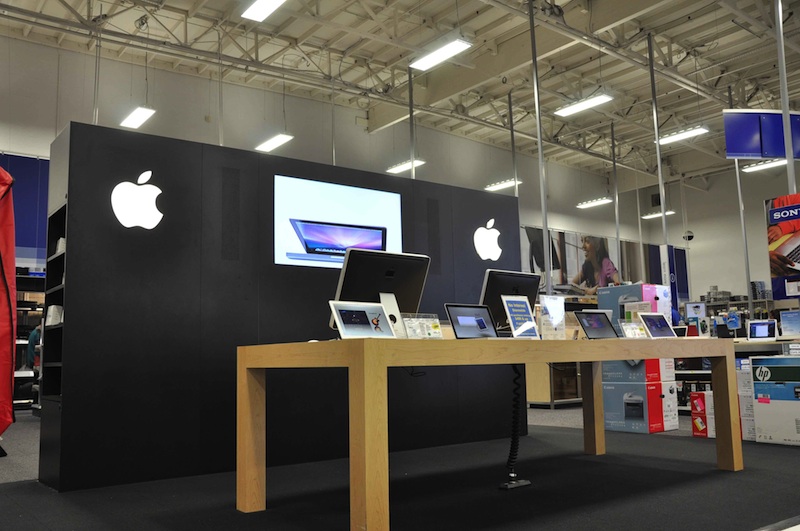 Apple and Samsung have of course become bitter rivals in the mobile device market, with Samsung rapidly establishing itself as the dominant manufacturer of Android-based devices and surpassing Apple in a number of metrics related to the smartphone market. Samsung has been tackling Apple head-on with its advertising, increasing its spending and sparking concerns that Apple needs to step up its game.

With the addition of high-profile shops inside Best Buy stores, Samsung has no doubt been able to leverage its recent successes in hopes of continuing that momentum for the Galaxy S4 and its other smartphone and tablet devices.

camnchar
Has Samsung had an original idea in their entire existence?
Rating: 97 Votes

Lesser Evets
I wonder when stores will merely be store-in-store-galore paradigms... and then we can just call them MALLS.
Rating: 51 Votes

Has Samsung had an original idea in their entire existence?


Considering Samsung has been around since 1938, I'm sure they've had stores for a long time. I've seen Samsung booths like that inside other stores for years, just because Best Buy are having them now they have to be copying?

Even if they did so what? You're complaining that they're having a store? Is Apple the only company allowed to have them?
Rating: 40 Votes

jayducharme
It'll be interesting to see what Samsung's "store within a store" looks like. I wonder if it will have a large black wall behind a blond wood table.
Rating: 30 Votes

snoopjonny
Are you allowed to say "****ing douche bags" in this forum?
Rating: 25 Votes


The report indicates that the Galaxy S4 will be the featured attraction of these shops, although Samsung's full line of smartphones and tablets will be on display.

How are they going to fit all 9583478 Samsung smart phones in one shop? Especially a shop within a shop :eek:
Rating: 19 Votes

nefan65
So essentially, they're just leasing space at Best Buy to sell their phones...?

Not very original, but then again...it is Samsung. :rolleyes:
Rating: 19 Votes

Has Samsung had an original idea in their entire existence?


Because having nice displays and placement in stores is a new idea?