A five-year-old boy in the UK accidentally made £1700 ($2550) of in-app purchases in a freemium game in just 15 minutes after asking his father to type in the password for a free download, reports the BBC (via Gizmodo).


The Zombies vs Ninja game was a free download, but with £70 ($105) in-app purchases for game keys and weapons packs. Neither the 5-year-old, Danny Kitchen, nor his parents were aware of the charges being racked up as the child played. His mother Sharon Kitchen said:

He was very upset when he realised what he had done. His brothers and sisters were telling him off, but of course he didn't know what he did - he's only five.

Apple refunded the charges, but the incident does highlight the dangers of freemium games aimed at young children. As for Danny:

I was worried and I felt sad. I’m banned from the iPad now.

The publicity comes just days after Apple settled a U.S. lawsuit over the same issue, offering affected customers iTunes credits of at least $5, with cash payments available to customers with claims over $30. 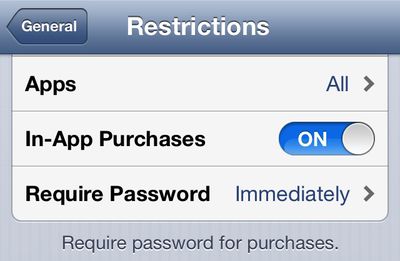 It is not entirely clear how Danny Kitchen was able to purchase in-app content if his father had only entered the account password to download an app, as Apple separated app and in-app purchases with iOS 4.3 two years ago. The Kitchen's password should have been required a second time before in-app purchase could be downloaded.

Apple also provides a variety of parental controls and restriction tools to help minimize the possibility of such issues, allowing parents to restrict what types of content may be used on the device, turn off app downloads or in-app purchases, and require the account password for every app or in-app transaction.

The Bulge
In-app purchases are the one single worst thing to happen to iOS. That's why we have those ****ing freemium games and apps. Jesus ...
Score: 72 Votes (Like | Disagree)

hollin
Something is wrong with society if a 5-year-old child is able to spend $2500 in a few minutes.
Score: 40 Votes (Like | Disagree)

Something is wrong with society if a 5-year-old child is able to spend $2500 in a few minutes.

I love these sorts of 'won't someone think of the children/western civilization is falling' comments.

They're always so well thought out.
Score: 35 Votes (Like | Disagree)

Rudy69
We need people to start owning up for their own mistakes. The password was put in by an adult, he's responsible for that purchase.
Score: 32 Votes (Like | Disagree)

anti-microsoft
This is not Apple's fault. Its a bit "cheeky" of the developer to put a £69.99 IAP in a Children's app but, ultimately, its the parents' fault. Parental Controls DO exist (and are not hard to find) and, technically, that app was aged 9 and upwards. So only the parents have themselves to blame.
Score: 26 Votes (Like | Disagree)

Unggoy Murderer
As stated, there's Parental Controls... that toggle is there for a reason, and I don't get why people don't enable it.
Score: 19 Votes (Like | Disagree)
Read All Comments