According to a report from Strategy Analytics (via Engadget) Apple's iCloud and iTunes Match are the most frequently used cloud media services, with a combined usage total of 27%.

To get its numbers, Strategy Analytics asked 2,300 Americans the following question: “Have you ever used any of the following online digital locker services which enabled you to store music, video (including TV shows and movies) or games online (”in the cloud“ and stream them to an Internet connected device?” 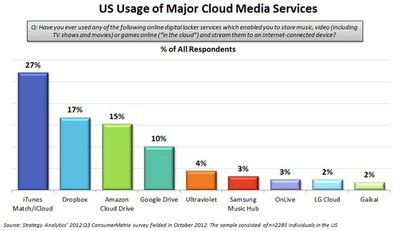 Dropbox came in second at 17% and Amazon's Cloud Drive came in third with 15%. Google Drive came in fourth, with Ultraviolet, Samsung Music Hub, Online, LG Cloud, and Galkai following behind.

The survey revealed that the majority of people (at 55%) had never used a cloud media service at all, and as Strategy Analytics points out, Dropbox, with its second place ranking, is the only service without an associated content ecosystem. Music is a major factor in cloud usage with 90% of Apple, Amazon, and Google cloud users storing music. 45% of Dropbox users use the service to store music.

“Music is currently the key battleground in the war for cloud domination. Google is tempting users by giving away free storage for 20,000 songs which can be streamed to any Android device, a feature both Amazon and Apple charge annual subscriptions for,” observes Ed Barton, Strategy Analytics' Director of Digital Media.

Usage of cloud storage is skewed heavily towards younger people, being especially popular among 20–24 year olds. iCloud and iTunes Match were the only services with more female than male users, and Google Drive skewed towards a male subscription base.

uknowimright
are they even aware they are using it?
Score: 6 Votes (Like | Disagree)

blacktape242
I'm a fan of itunes match although it does still need some fine tuning. :cool:
Score: 5 Votes (Like | Disagree)

paulsalter
Some strange options in their

They combine iTunes Match and iCloud but then just look at Google Drive, where is the Google Music Match

Of course if you ask people if they store music on google drive not a great amount will say yes, ask them about google music and you might get a different answer

great way of leading questions to get the answer you want to see
Score: 3 Votes (Like | Disagree)

JoeIsInTheCloud
It's important to qualify this study looked exclusively at services used as "digital lockers" for media files. I would like to see metrics from users of cloud services for documents and business materials. I suspect iCloud wouldn't even make the list.
Score: 3 Votes (Like | Disagree)

KylePowers
This is dumb, because it's inherently part of the ecosystem. I don't even know if you have to manually enable iCloud when purchasing an iDevice, but I can assure you if it provides the option, most consumers blindly press yes.

I have 2 Macs and 2 iDevices and I have never used iCloud for anything actually useful (aside from Photostream, which doesn't even sync videos).

Dropbox all day, errr'day - 25GB gets me a long way in syncing files between my Macs and accessing files from my iDevices (and any computer with an internet connection).
Score: 2 Votes (Like | Disagree)
Read All Comments

Monday August 2, 2021 2:12 am PDT by Sami Fathi
For future iPhones, iPads, and MacBooks, Apple plans to use smaller internal components in an effort to increase the size of the device's battery, according to DigiTimes. Image Credit: iFixit Specifically, Apple plans to "significantly increase the adoption" of IPDs or integrated passive devices for the peripheral chips in its products. These news chips will be slimmer in size and allow for...
Read Full Article • 72 comments