"The pricing of this digital content is based on the wholesale prices which are set through negotiated contracts with the record labels, movie studios and TV networks," said Mr King, who is Apple's vice president for Australia, New Zealand and South Asia.

King went on to say that "the content industry still runs with perhaps old-fashioned notions of country borders or territories or markets" and that it creates confusion for customers. He also said that Apple's iTunes pricing in Australia is "comparable to other Australian physical and online stores."

When asked by Labor MP Ed Husic, who is a member of the committee conducting the inquiry, whether Apple could influence the price of digital content in Australia, King said that it was up to the rights holders. King also said that Apple would love to see "cheaper, lower prices in the Australian market," according to News.com.au. 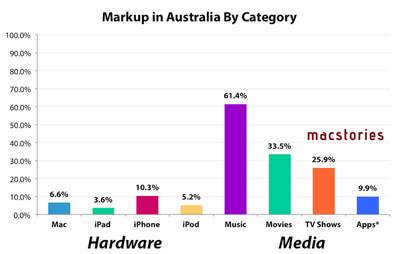 Earlier today, MacStories noted that markups in Australia average as much as 61.4% for music, 33.5% for movies and 25.9% for TV shows when a subset of content offerings is compared to prices in the United States once Australia's Goods and Services Tax (GST) has been accounted for. Markups for Apple's hardware products are more reasonable, with Mac, iPad and iPod prices in Australia generally falling within 10% of U.S. prices. The iPhone line, however, can go as high as a 16% markup for the iPhone 5 and 4S, while the iPhone 4 is actually slightly cheaper in Australia than it is in the United States.

King said that Apple had gone to great lengths to make sure that its hardware products are priced at "parity" in Australia, which takes into account Australian GST as well as the cost of delivering its products to the country.

Adobe and Microsoft were also questioned as part of the inquiry following summonses being issued last month, with Adobe explaining that it charges Australian customers $1000 extra for a software suite because users are receiving a "personalized" service on their local website. Microsoft said its prices, which include a $2000 increase for a software suite, were based on market competition and that users would vote with their wallets if they didn't agree.

batchtaster
Apple's response sounds about right, and seems to be reflected in the percentage markups; that is, there's not an across-the-board markup for all content, making it believable that music rights holders have different demands from movies or TV shows.

Adobe and Microsoft's responses are complete ass. Show me the "personalized service on their local website". And let me trade it in for the extra $1000 I'm outlaying for the privilege of that non-existent service, since I'd rather have the cash. Microsoft's is simply that people are paying it, so they can charge it. Which is true, but still ass-worthy.
Score: 9 Votes (Like | Disagree)

Santabean2000
I'm sick of the content industry holding the world to ransom. It's almost our duty to display civil disobedience (read downloads) to force them into alternative models.

People will pay a reasonable fee for good content if the model is done right. Piracy for music has tailed away since the rise of Spotify et al. It's about time the TV and film industry moved to similar offerings.
Score: 9 Votes (Like | Disagree)

ArmCortexA8
Obviously the 61.4% price markup indicates to me their negotiations for Australia were pretty poor. Maybe they should renegotiate and get this resolved. Seems to me like price gouging at this rate.
Score: 7 Votes (Like | Disagree)

I'm sick of the content industry holding the world to ransom.

Apple's response sounds about right, and seems to be reflected in the percentage markups; that is, there's not an across-the-board markup for all content, making it believable that music rights holders have different demands from movies or TV shows.

Adobe and Microsoft's responses are complete ass. Show me the "personalized service on their local website". And let me trade it in for the extra $1000 I'm outlaying for the privilege of that non-existent service, since I'd rather have the cash. Microsoft's is simply that people are paying it, so they can charge it. Which is true, but still ass-worthy.


Exact same thinking. Apple was more, "Don't look at me" while Microsoft and Adobe were "Pfff, cause we can, who else you gonna turn too?"
Score: 5 Votes (Like | Disagree)

Surprise surprise, we are on an apple forum and apple couldn't possibly do anything wrong but everyone else has....

Look at the responses. Apple at least tried to explain or fob the blame off onto someone else with a semi-plausible excuse. Neither Adobe nor Microsoft, who are entirely in control of the prices of their products - since they actually make them - even bothered.
Look at the numbers. They're all jacked up on the music prices. Because everybody knows the music industry is desperate to keep prices low, so it must all be Apple.