As noted in our forums, Apple's latest OS X 10.8.3 beta seeded to developers as build 12D76 yesterday contains new drivers for NVIDIA's high-end Quadro K5000 graphics card. NVIDIA announced the Quadro K5000 for the Mac Pro last September, but has yet to actually release the product. 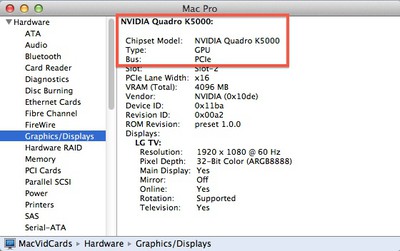 The first developer build of OS X 10.8.3 seeded last November added AMD Radeon 7000-series drivers, so it appears that the public release of the operating system update will include support for several high-end graphics options. Just yesterday, we noted that Sapphire was previewing its Radeon HD 7950 Mac Edition graphics card at CeBIT.

Apple has not yet revealed when it will be releasing OS X 10.8.3 to the public, but we've heard that the latest build was distributed to company employees as a pre-release version, so it seems that its debut may be very close after over three months of developer testing.

Apple is expected to release a revamped Mac Pro sometime this year, although it is unclear exactly when the company is planning for the workstation to make its debut.

epelba01
Forget Mac Pro. Lets start with the official release of 10.8.3. Appleinsider stopped mentioning the betas because it has become an almost weekly occurrence with no indication of official release. It's a joke.
Score: 6 Votes (Like | Disagree)


At this point we are beyond "rush".

Forget Mac Pro. Lets start with the official release of 10.8.3. Appleinsider stopped mentioning the betas because it has become an almost weekly occurrence with no indication of official release. It's a joke.

Of all the things to get irked about, this just about takes the biscuit. What possible difference does it make to you whether they release 1 beta or 12, as long as it's well tested before it's released? And since when did Apple ever give you an indication of the official release date in advance?
Score: 4 Votes (Like | Disagree)


In games, yes. In professional applications, no.
Score: 4 Votes (Like | Disagree)

satyrica
Don't get too excited. The card and these drivers will be old when the pro finally releases....
Score: 3 Votes (Like | Disagree)
Read All Comments

Thursday January 21, 2021 11:58 am PST by Juli Clover
Apple's upcoming iOS 15 operating system, which we expect to see unveiled in June, is rumored to be dropping support for a few of Apple's older iPhones. According to French site iPhoneSoft, iOS 15 will not be able to be installed on the iPhone 6s, the iPhone 6s Plus, or the 2016 iPhone SE, all of which have an A9 chip. The iPhone 6s and 6s Plus were introduced in 2015 and are now more...
Read Full Article • 191 comments