In January, a number of Apple employees had their Macs compromised following visits to the popular iPhoneDevSDK forum. Employees from Facebook and likely dozens of other companies were compromised as well. In a blog post today, site owner Ian Sefferman shared some limited details* about what happened and what the site is doing about it.

Most notably, the attack was reportedly ended by the hacker on January 30, 2013, meaning the site believes that there is no ongoing threat. 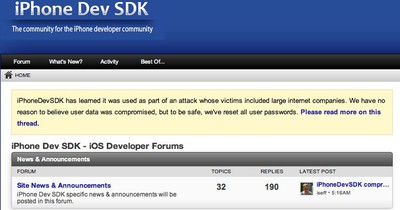 What we've learned is that it appears a single administrator account was compromised. The hackers used this account to modify our theme and inject JavaScript into our site. That JavaScript appears to have used a sophisticated, previously unknown exploit to hack into certain user's computers.

We're still trying to determine the exploit's exact timeline and details, but it appears as though it was ended (by the hacker) on January 30, 2013.

As with Facebook, it's important to stress that we have no reason to believe user data was compromised.

Eric Romang has done some additional detective work on the the attack, laying much of the blame on Java itself. Last month, Apple twice blocked Java 7 from working on users' Macs, perhaps after the company discovered that its own machines had been compromised.

* URL to blog post: http://iphonedevsdk.com/forum/site-news-announcements/111889-iphonedevsdk-compromised-what-happened-and-how-we-are-dealing-with-it.html -- We've avoiding linking it due to the recent hack at that site.

newagemac
Is it Java or Javascript? Those are two entirely different things. Java is a plugin with security holes and can be disabled. Javascript is not Java in any way, shape, or form and is not a plugin. It is now as basic to the web as HTML and CSS. You shouldn't disable Javascript unless you want to break pretty much any modern website.

One of the dumbest things ever done on the web was giving it the name of "Javascript". Why the heck there hasn't been a movement to change the name puzzles me.
Score: 12 Votes (Like | Disagree)

So lots and lots of big giant companies were hacked. It was the fault of some third party.


But all we hear about is that Apple was hacked! Apple has lousy security! Anybody who owns any Apple anything is in SERIOUS DANGER! Run for the hills, but only after destroying all Apple products!

Typical. Apple is just the whipping boy of the mainstream media.

They go into a frenzy and let everybody else have a pass. But not Apple. They act like it is all Apple's fault. They pick on Apple. It is not FAIR! Apple is a scapegoat. Everybody who owns any Apple anything is seen as a lesser person because of this stuff. A complete and total idiot.

I for one am sick of it.

Well, I use Safari with Java disabled, AdBlock, and Click to Flash. I had been thinking of adding one of the NoScript extensions, but haven't gotten around to it yet. Unfortunately, I got suckered in by a Phishing attempt a few days ago (it's no longer safe to check your email before you're fully awake...) and am wondering what to do about it.


Change all of the affected passwords. Close any credit card accounts that were compromised. If you gave your SS number, there is nothing that can be done about that.
Score: 4 Votes (Like | Disagree)

Sean4000
and THIS is why "noscript" is mandatory on all of my company's computers.
Score: 4 Votes (Like | Disagree)

Is it Java or Javascript? Those are two entirely different things.

Apparently they used a JavaScript exploit to inject Java code. It's all a little unclear at the moment. Hopefully Facebook or (less likely) Apple will post a play-by-play going into exactly what happened at some point.
Score: 3 Votes (Like | Disagree)

SeattleMoose
After all this java stuff, I went into Safari and disabled Java (not JavaScript) and guess what? Safari is INDEED snappier!!! (no joke...it really is).

And I agree with a previous poster, Apple is the media's favorite whipping boy right now. Wallstreet's lapdog, the media, is being used to manipulate AAPL stock prices via fear and gloom. When they have driven it down low enough...the sharks will buy-up AAPL yet again...run a bunch of positive articles (PUMP)...followed by yet another DUMP when it gets to their target "high" value. Then they'll place puts on AAPL, run more gloom and doom stories, and make money on the way down too. And then you have Einhorn, the hedge fund "humanitarian" who simply wants to raid the APPL cash pile for his elite clients. It has already been proven that AAPL stock volatility was tied directly to hedge fund manipulation. Expect more...unfortunately. Wallstreet is just a steaming pile.
Score: 2 Votes (Like | Disagree)