As noted by ZDNet, a major security vulnerability in Java 7 has been discovered, with the vulnerability currently being exploited in the wild by malicious parties. In response to threat, the U.S. Department of Homeland Security has recommended that users disable the Java 7 browser plug-in entirely until a patch is made available by Oracle.

Hackers have discovered a weakness in Java 7 security that could allow the installation of malicious software and malware on machines that could increase the chance of identity theft, or the unauthorized participation in a botnet that could bring down networks or be used to carry out denial-of-service attacks against Web sites.

"We are currently unaware of a practical solution to this problem," said the DHS' Computer Emergency Readiness Team (CERT) in a post on its Web site on Thursday evening. "This vulnerability is being attacked in the wild, and is reported to be incorporated into exploit kits. Exploit code for this vulnerability is also publicly available."

Apple has, however, apparently already moved quickly to address the issue, disabling the Java 7 plug-in on Macs where it is already installed. Apple has achieved this by updating its "Xprotect.plist" blacklist to require a minimum of an as-yet unreleased 1.7.0_10-b19 version of Java 7. With the current publicly-available version of Java 7 being 1.7.0_10-b18, all systems running Java 7 are failing to pass the check initiated through the anti-malware system built into OS X. 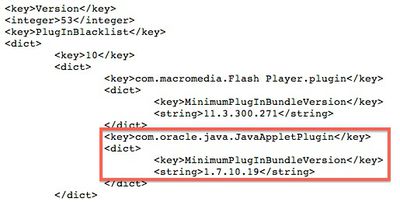 Apple's updated plug-in blacklist requiring an unreleased version of Java 7
Apple historically provided its own support for Java on OS X, but in October 2010 began pushing support for Java back to Oracle, with Steve Jobs noting that the previous arrangement resulted in Apple's Java always being a version behind that available to other platforms through Oracle. Consequently, Jobs acknowledged that having Apple responsible for Java "may not be the best way to do it."

It wasn't until last August that the transition was essentially complete, with Oracle officially launching Java 7 for OS X. Java 7 does not ship by default on Mac systems, meaning that many users are not affected this latest issue or other recent ones, but those users who have manually installed Java 7 may be experiencing issues with their systems.

There is no word yet on when an updated version of Java addressing the issue will be made available by Oracle.

Update: As detailed in the National Vulnerability Database, the issue affects not only the Java 7 plug-in, but at least some versions of Java 4 through 7.

Apple has not blocked Java 7 on OS X.

Please correct the headline ASAP before this thread becomes a major flamewar.
Score: 23 Votes (Like | Disagree)

xionxiox
Java is the worst thing ever. Always buggy and slow. Oracle doesn't give a damn about Macs.
Score: 19 Votes (Like | Disagree)

mreed911
Wow. The Apple fix for this is both elegant and scary - I tested it on mine and I definitely get the popup that Java is unsecure and out of date, and blocked - but I didn't have to do anything to get that update to xprotect.plist. No software update, no nothing. That's rather scary.

I suppose at this point I'm willing to trade the 0-day security for Apple's ability to reach in and tweak settings.
Score: 14 Votes (Like | Disagree)

I tested it on mine and I definitely get the popup that Java is unsecure and out of date, and blocked - but I didn't have to do anything to get that update to xprotect.plist. No software update, no nothing. That's rather scary.

OS X systems check for an updated version of that file on a daily basis. It's primarily used for malware definitions, but can also be used to require minimum versions of certain plugins, as with Flash and Java.

Apple has not blocked Java 7 on OS X.

Please correct the headline ASAP before this thread becomes a major flamewar.

You are of course correct, and I've updated accordingly to make things more clear.
Score: 8 Votes (Like | Disagree)

Well, I don't think I will join the debate about Java, but a temporary fix to enable Java (I know, it is a security hazard, however I don't have another option as I have to use the Juniper SSL VPN network connect client).
So,
1. close Safari
2. Open a terminal
3. sudo vi /System/Library/CoreServices/CoreTypes.bundle/Contents/Resources/XProtect.meta.plist
4. Find the string <key>MinimumPlugInBundleVersion</key>
5. Just under that line you should see the version. Change the last portion of the number from 19 to 1.
6. Save and exit
7. Start up Safari and you should work. You must keep in mind that this file may be updated by Apple again, so this is only temporary and should only be done if you *must* use your current version of Java.


Thanks so much for posting this. The company I work for uses a payroll system that requires the Java plug-in and I was unable to access it. Would have been stuck without this.

I like that Apple is clearly looking out for the safety of their users, but at the same time, it would be nice if they would put in a user interface for temporarily side-stepping this kind of thing instead of having to hack around in the system files. Just a simple prompt of "This plug-in/app has been disabled due to security issues. Do you want to run it this one time?" That would serve the dual purposes of not leaving their users stranded and giving an explanation for why it suddenly doesn't work.
Score: 6 Votes (Like | Disagree)

Seriously? From a programmer's perspective: http://tech.jonathangardner.net/wiki/Why_Java_Sucks

Thanks for the reply.

I write Java on a daily basis, I wanted to know from you why you thought 'Java Sucks'... or if you were just on some bandwagon. Some reasons why Java sucks are now invalid and have been for a long time - such as 'Java is Slow'... which is a gross generalization.

Some of those points or valid in the link, others are just his opinion, others may disagree or agree.

Java can be a good choice on the server side, on the GUI side, not so much. Saying that, writing webapps with Java is not a great experience - there are better choices - YMMV.
Score: 6 Votes (Like | Disagree)
Read All Comments