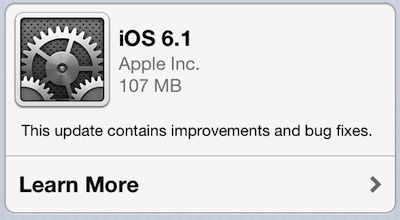 “iOS 6 is the world’s most advanced mobile operating system, and with nearly 300 million iPhone, iPad and iPod touch devices on iOS 6 in just five months, it may be the most popular new version of an OS in history,” said Philip Schiller, Apple’s senior vice president of Worldwide Marketing. “iOS 6.1 brings LTE support to more markets around the world, so even more users can enjoy ultrafast Safari browsing, FaceTime video calls, iCloud services, and iTunes and App Store downloads.”

New LTE carriers for iPhone 5 supported in the update include:

However, as Jeremy Horwitz of iLounge points out, the new LTE carriers are only supported by the 4th-generation iPad, the iPad mini, and the iPhone 5. Third-generation iPads do not support any of the new carriers.

CristobalHuet
Allow me to say what everyone's probably thinking.

Spetsnazos
meanwhile Android is kicking it into higher gear with JellyBean and taking over the market.

Chuck-Norris
such an exciting update...
Score: 50 Votes (Like | Disagree)

hakr100
Gosh, I've been waiting my whole life to be able to buy movie tickets via Siri. Hooray!
Score: 41 Votes (Like | Disagree)

meanwhile Android is kicking it into higher gear with JellyBean and taking over the market.

Exactly. What kind of company puts put point updates? ONLY major updates should be released. Any company that puts out both major AND minor updates is headed for doom--and fast! Just as you say.

You seem certain Apple is not working on iOS 7. I bet you're right--it's just the kind of thing they'd forget to do!

(But I think you mean Android 2.3, not Jelly Bean. Jelly Bean's market penetration is amazingly poor for how long it has been out :p That's Android-style planned obsolescence for you... at least Apple gives you updates for the 2 years you're paying off the phone.)

Forgive me if anyone has already said this, but all I've heard about the latest Android update (4.2) has been how buggy and awful it is.....

What was that about Android pioneering the future? :rolleyes:

Sadly, the public doesn't realize that and keeps flocking to iOS in droves, giving it customer satisfaction numbers that Android cannot touch. So many Android users don't even know or care that they have an Android phone. They're glad they have a web browser and have no idea that a more painless option exists. But if they ever try a malware-free, power-efficient, easy-to-use iPhone, they're not likely to go back to Android. Switchers exist in both directions... but far from equally! Look at the numbers and you'll see Android taking market away from dumbphones, not from iOS users.
Score: 27 Votes (Like | Disagree)

meanwhile Android is kicking it into higher gear with JellyBean and taking over the market.


Yeah, dying fast...record breaking Q4, but the iPhone is garabage nobody wants huh?
Score: 27 Votes (Like | Disagree)
Read All Comments