Reuters reports that Sharp, one of Apple's primary display panel partners for its mobile devices, has slashed production of iPad displays at one of its plants. Sources did not indicate the reasons for the dramatic cut, but it appears to be a combination of a shift in consumer interest to the smaller iPad mini and a natural seasonal slowdown coming out of the holiday quarter.

Sharp's iPad screen production line at its Kameyama plant in central Japan has fallen to the minimal level to keep the line running this month after a gradual slowdown began at the end of 2012 as Apple manages its inventory, the industry sources with knowledge of Sharp's production plans told Reuters. 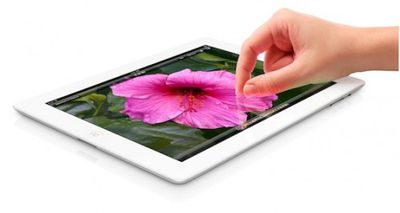 Apple also obtains iPad display panels from Samsung and LG Display, with a source at Samsung indicating that there has been no production cut there and a source at LG suggesting that any production cuts there were in line with typical seasonality.

Reports of cutbacks in iPad component production come close on the heels of reports that Apple has slashed orders for iPhone 5 parts, although there have been significant questions about the figures cited in those reports and whether the decline actually represents a weakening of demand.

Apple.
Proudly going out of business since 1976.

That's not what he said.

The exact quote is this :

Apple has done expensive user testing on touch interfaces over many years, and we really understand this stuff.

There are clear limits of how close you can place physical elements on a touch screen, before users cannot reliably tap, flick or pinch them. This is one of the key reasons we think the 10-inch screen size is the minimum size required to create great tablet apps.

So yeah, "Steve would never have shipped an iPad Mini" is quite accurate ;) (though I know Steve was one of the biggest flip-floppers around... iPod Video after "People don't want to watch video on a small screen" and "People don't read anymore" a year before iBookStore).

They won't make an iPad Mini they said.
It will fail hard they said.

Steve chose his words very carefully. The aspect ratio and larger diagonal together mean the mini has about 40% more screen space than the android 7" tablets he was talking about.

At it's current size, the standard iOS on screen interface elements are a shade over the minimum touch target size Apple recommends as usable, based on their usability research. That's not true of the Android tablets.

Too bad the Internet is so good at remembering quotes uh ? ;)

Jobs talked about 7 inches tablets, the iPad mini is 8 inches  a huge difference in terms of user experience.

In fact now it seems that Samsung is planning an 8 inch tablet to compete.


Jobs talked about everything less than 10 inches. *taps the quote*.
Score: 18 Votes (Like | Disagree)

BornAgainApple
And investors will overreact once again.
Score: 17 Votes (Like | Disagree)

maybe they are transitioning production in these factories to IGZO
Score: 16 Votes (Like | Disagree)

polbit
I still find it funny that the product Jobs said nobody wanted it stealing the tablet show at Apple by most accounts. Even though Mini is not for me at this point, I'm still happy that Apple is giving the customer the choice. Now if they could only do the same with the iPhone...
Score: 12 Votes (Like | Disagree)
Read All Comments