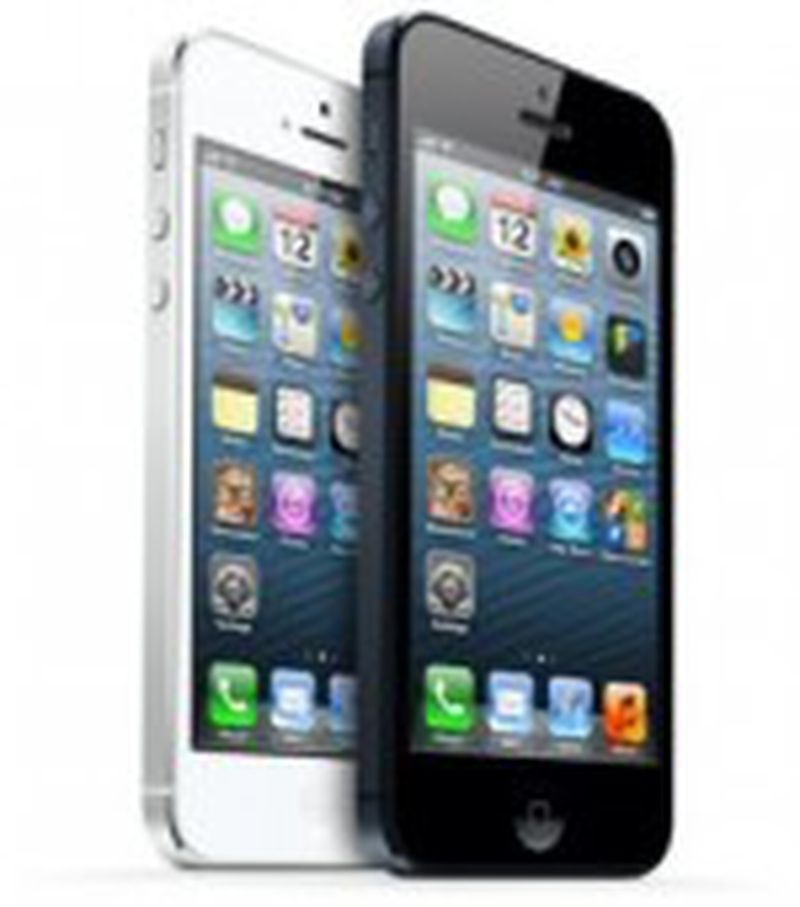 While questions remain about claims from earlier this week that Apple has slashed iPhone 5 component orders, CNET is now reporting on market research firm DisplaySearch senior vice president Paul Semenza's comments on how the iPhone 5's initial shipment ramp was simply too large to maintain.

"It was a very quick ramp up. The Q4 [estimate] was about 61 million [for the iPhone 5]...that may be dialed back a bit, but anything near that number is still huge," he said, referring to an estimate of display shipments for the iPhone 5.

"That would support the theory that the ramp was too much to sustain."

CNET mentions that the first quarter of sales for the iPhone 4S registered far below that for the iPhone 5, providing little reason for such a strong decline in iPhone 5 interest. Yesterday, Semenza told The New York Times that Apple had cut its display order from 19 million to 11-to-14 million for January, noting that demand from Apple had been "corrected significantly." But he also mentioned to CNET that he'd heard of changes to orders before the new year.

Theories abound as to the just how much Apple has cut component orders and the reasons for those cuts, but many believe that improving yields and aggressive ramping during the holiday quarter may simply have left Apple with an oversupply of parts heading into the new year. Combining that excess inventory with a natural slowdown following the strong launch quarter for the device could lead to substantial reductions in part production. Still, it seems unlikely that Apple would have miscalculated component demand for the current quarter by the nearly 50% number originally cited by Nikkei and The Wall Street Journal.

Recently, it's been reported that Apple is prepping iPhone 5S production for March ahead of a release in June or July, a rapid update cycle that could also be forcing adjustments in Apple's component orders.

Mr-Kerrse
I dont understand the constant moaning about the iphone 5, i like my iphone 5 & yes it is different to the 4s as it is much faster & i like the screen being longer not wider as i don't want a huge phone.

Stop worrying about the iphone keeping up with the competition & enjoy it for what it is, if you don't like Apple products then buy a different make !

ThatsMeRight
iPhone sales were, without doubt, still extremely high during the holiday season, but I actually hope that sales are lower than expected.

Why? It sends Apple a message that bigger upgrades are needed. A few years ago, I remember Apple as the company that had the best software combined with great hardware.

The iPhone 5 isn't a bad phone. In fact, it's a really good phone. When you asked me in 2010 which phone was the best smartphone? iPhone 4. It had hardware similar or better than that of top competitors and it had just received a huge software upgrade (iOS 4, which brought stuff like multitasking).

Last year, I'd probably still say the iPhone 4S. While Android (and Windows Phone) was gaining terrain, the iPhone 4S still had the best over-all package.

This year, I'd say you can't go wrong with any high-end smartphone: Nokia Lumia 920, HTC One X, Samsung Galaxy S III, iPhone 5. Why? Because of the software: Android has made huge jumps compared to iOS - and Microsoft has brought a refreshing mobile OS to the market.

And look what is coming this year!
Android is getting more refined and more refined, basically, by the day. iOS 7 needs to be big. It needs to change, even if it is only for change's sake. People like new, fresh, shiny things. Apple has been playing it safe with iOS 5 and iOS 6.

And look what is coming on the hardware side: quad-core Cortex A15 CPUs and even more powerful GPUs. Bigger batteries which will probably give us much better battery life. Drastically improved cameras (Nokia PureView, anyone?).

Same on the hardware side: Apple is playing it safe. They gave the iPhone 5 a bigger display: big enough to attract users who want a bigger display, but small enough to make sure they won't lose any customers who preferred the 3.5" display.

Apple in 2008/2009/2010 would have taken more risks. More drastic changes to iOS. Back in 2010, they gave us multitasking while - as it is reported - they weren't willing to give it to us at first. It would make things too complicated. Looking back, giving us multitasking was a great idea because there are now so many great new apps which make great use of it (like Spotify).

Back in 2008, Apple gave us the App Store. According to the news articles I read, Apple - at the time - wasn't really willing to do this (they were 'all-in' on web apps) but if we look back this was a great choice. They took the risk and it paid off.

Come on, Apple. Take some risks. Up the game.
Rating: 11 Votes

... you need to throw things overboard and start with a fresh design. Start with drastically new features. You need to take a risk like Microsoft did with Windows 8.


Ask MS how taking that "risk" is working out for them! Throwing things overboard and starting with a fresh design is what you do when you're desperate, sitting on a failing product line and/or strategy, and generally behind the eight ball, present-day RIM is another example.

... they weren't willing to give it to us at first. It would make things too complicated. Looking back, giving us multitasking was a great idea because there are now so many great new apps which make great use of it (like Spotify).


Again, your specious reasoning is showing! :)

You say they weren't willing to "give it to us", and even suggest that it turned out to be a "good idea" in the end, as if those mean old jerks at Apple got it wrong.

I say that until iOS4 and the A4 chip, Apple couldn't achieve the desired level of user experience, and only added this functionality in iOS 4 when it was ready for Primetime, as they say.

arcite
The iphone 5 is still selling BIG by any metric, just not quite as big as a couple analysts predicted. Pile in on cheap apple stock I say!
Rating: 8 Votes

Via Forbes: Why The WSJ Got The 'iPhone Demand Is Crashing' Story All Wrong (http://www.forbes.com/sites/markrogowsky/2013/01/15/did-the-wsj-get-punkd-on-apple-or-is-it-rotten-to-the-core/)
Rating: 8 Votes

Come on, Apple. Take some risks. Up the game.


Apple could hardly push CPU and GPU technology any harder, they bought their own chip design companies in house, made a hand laid out exceptional SoC in the A6, and they clearly haven't been messing around when it comes to the GPUs they've been using.
Rating: 7 Votes

applesith
Who cares. The doom and gloom news already dragged my AAPL. Media loves to pick favorites. Where was the reporting that FB search graph is crap and should have been included in FB years ago? No, instead we have to hear about every anecdotal potential hiccup at apple as 100% true facts.
Rating: 6 Votes

Apple invented a fantastic device, and kept improving it up to the iPhone 4. However since then its stagnated, with very little in the way of improvements.

Over the last 2 years their competitors (namely Samsung) have upped their game, and now have a product that many now consider to be better, or at very least on par.

Apple needs to go back to the drawing board and re-re-invent the iPhone again. There are a slew of features that could be improved/added to the iPhone. Wasting time on things like maps is just reducing the amount of great developers that could be working on more useful apps and features.

I'd hope that the next iPhone looses the trademark dull 'slab of glass, bit of aluminium and a button' image as its getting to be very tired. That and an overhaul of iOS. They cant treat it like Mac OS X and just redesign it once every 12-14 years.

Putting this aside. Even the biggest fanboy has to admit this simple little fact:

Samsung is the best thing that could have happened to the iPhone and Apple. It's forcing them to develop the iPhone instead of doing a slow release cycle (ala iPod). Without Samsung pushing like hell, the iPhone would not be what it is today.

Obviously they cant take all the credit, Google has been doing a bloody fantastic job with Android, and the other big players such as HTC have been releasing some pretty popular products.
Rating: 5 Votes

We don't know the reasons, and probably won't. Whether it's this or inaccuracies in use for displays, or other factors, it was wholly irresponsible for media outlets (even Forbes and WSJ) to publish the drivel with the notion of causality without fact checking. Same goes for MR. Shame on you for posting drivel in the name of clicks without substantiating if it is a possibility. Unless the causality is verified, don't display it as fact.

What is apparent, and was from the start, was that these media outlets were probably unwittingly playing into someone's scheme to short the stock. This hasn't been the first time it's happened to Apple, and is pretty common with most high-value stocks.


Fact checking? HA! The news media does nothing of the sort these days. There is no accountability and the whole idea is to be the first to break the story.

Look at Sandy Hook. One media outlet says the shooter is the real shooter's brother. Everyone else reports it too without bothering to check a thing. Facebook pages go up calling for the kid's death. He gets death threats and hundreds of messages from people that all believe he's the killer. Hours later, the media finds out they're wrong when the police correct them. Anyone issue an apology? Hell no. They aren't accountable for their actions.
Rating: 4 Votes

adildacoolset
If Apple get millions of sales of iPhones, it's because of blind followers. But if an android device sells well, it's because "openness wins".

If an iPhone has an unconfirmed, unproven report that it's extremely gigantic order is reduced to just a gigantic order, Apple are sinking (Hust like they always have been in the past, but magically just became the biggest company)
Rating: 4 Votes
[ Read All Comments ]