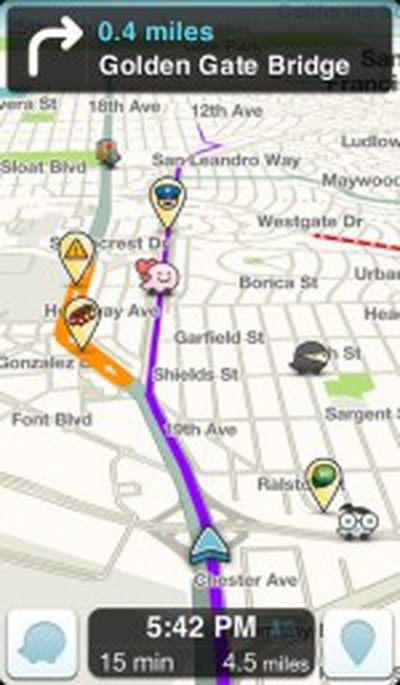 Citing "rumours flying around", TechCrunch reports that Apple appears to be investigating the possibility of acquiring Waze, the popular social turn-by-turn navigation company. Waze, which takes advantage of real-time info from users to help others keep up-to-date on the latest road and traffic conditions, is already a partner in Apple's new Maps app, and an acquisition could help Apple beef up its struggling mapping services.

The report suggests that an acquisition of Waze could be even more beneficial for Apple than a deal with Foursquare, which holds only a limited audience internationally.

Because Waze maps are built on the location of moving cars, it’s far more accurate than check-in apps. Outside of Google’s project to map cities with Streetview cars – something which has taken years to complete – and the real-world mapping undertaken by volunteers on the Open Streetmaps open source project, there has been little to match Waze’s approach. Waze turned mapping into not only a game, but also a way for drivers to be social, reporting road obstacles, traffic and police traps. It is properly useful.

It would also cost Apple northwards of $500M+ to buy Foursquare (which has raised $71 million is known to be raising another round), and gain, what? The location of restaurants, bars and airports? Given Waze has raised $67 million, Apple could acquire far better mapping data and a real driving app.

Waze was one of the iOS apps featured by Apple as an alternative to its own Maps app for users looking for another solution while Apple continues enhancing its offering. The service has over 30 million users across iOS and Android, and has proven popular as a free alternative to other turn-by-turn navigation services.

Update: TechCrunch has updated its article to note that Apple is offering roughly $400 million plus $100 million in incentives for Waze, but Waze is said to be holding out for something closer to $750 million.

Another free and open service to be destroyed and reshaped according to Apple's mentality? I hope not.

D-Back
Yes, do it now! Waze is absolutely amazing.
Score: 10 Votes (Like | Disagree)

moabal
I hope not. I do not want Apple to ruin another good thing!
Score: 8 Votes (Like | Disagree)

xlii
I use Waze and I can't say enough good things about their iPhone app.
Score: 7 Votes (Like | Disagree)

T2theJ1990
Not to mention that WAZE was developed by former Apple employees. So they already know the Apple way, I think they should buy them, but keep a free app on Android, And make one for Windows.
Score: 6 Votes (Like | Disagree)

Baumi
I don't like the idea. Yes, better access to Waze's data would be a good thing for Apple, but the reason for the success of Waze lies in its de-centralized, community-driven approach  something that's just the opposite of The Apple Way(tm). If Apple sought to buy and control Waze, it'd most likely try and make it conform to Cupertino corporate culture, destroying the very thing that made Waze successful.

What would make sense is an exclusive deal: Waze would remain independent and still be allowed to use its data for its own applications on whatever platform they desire, but they wouldn't be allowed to sell their data to anyone besides Apple. That way, Waze could continue to do its own thing, Waze users would still be happy, and Android and Windows Phone owners using the Waze app would be helping to make Apple's maps better instead of contributing to Google's or Microsoft's datasets.
Score: 5 Votes (Like | Disagree)
Read All Comments