Apple is now carrying the Nest Thermostat in its retail stores through the United States and Canada. The development comes as Apple has been carrying it online for several months. 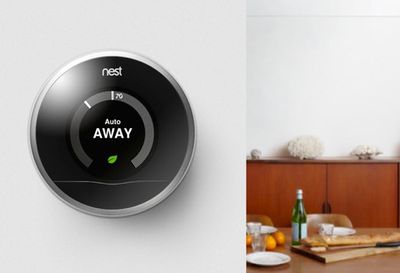 The Nest thermostat is priced at $249.95 in the U.S. online store and is just one of a number of products featured in Apple's App-Enabled Accessories section. The thermostat can be controlled via a free universal iOS app [App Store], with access to controls also available through web browsers.

The Nest Learning Thermostat helps you stop wasting energy, while providing control using your iPhone, iPad, iPod touch, or Mac. Consider that your thermostat controls about half your energy bill—more than TV, appliances, and lighting combined. But it's wasting energy every time it turns on the heating or cooling system in an empty house. The Nest Learning Thermostat solves this problem by programming itself, turning itself down when you're away, and keeping track of your energy use.

Apple features a number of such app-enabled products in its stores, including the iGrill cooking thermometer and Withings blood pressure monitor and body scale.

I have a programmable thermostat which can be programmed for 4 different settings each day. I don't remember exactly what I paid for it, but I know it was less than $100 including installation by an HVAC professional...so if I could do it myself, it would have been less.

Serious question...what is the advantage of the NEST (aside from looking extremely cool :D) over my thermostat?

For me, it's the live feedback (i.e. daily energy usage), remote manageability (via smartphone apps or the web), and its ability to detect when nobody is home and changes the temperatures accordingly, in addition to any hard-set schedule that you may have.

I also like how they update the firmware with new features (as they develop them), like the new AirWave (http://support.nest.com/article/What-is-Airwave) feature.

Here are some shots I was able to snag at work, of what my home system is currently doing.

But honestly, I mostly got it because when my roommate (whose bedroom is downstairs, by the thermostat) cranks down the A/C in the summer (to artic levels) right before he goes to bed, I can adjust it from my upstairs bedroom without having to get out of bed. 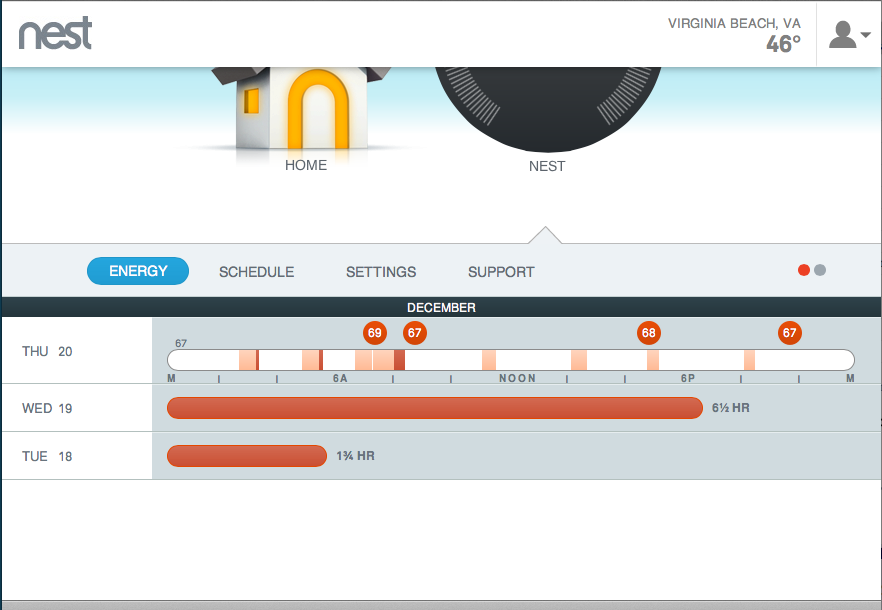 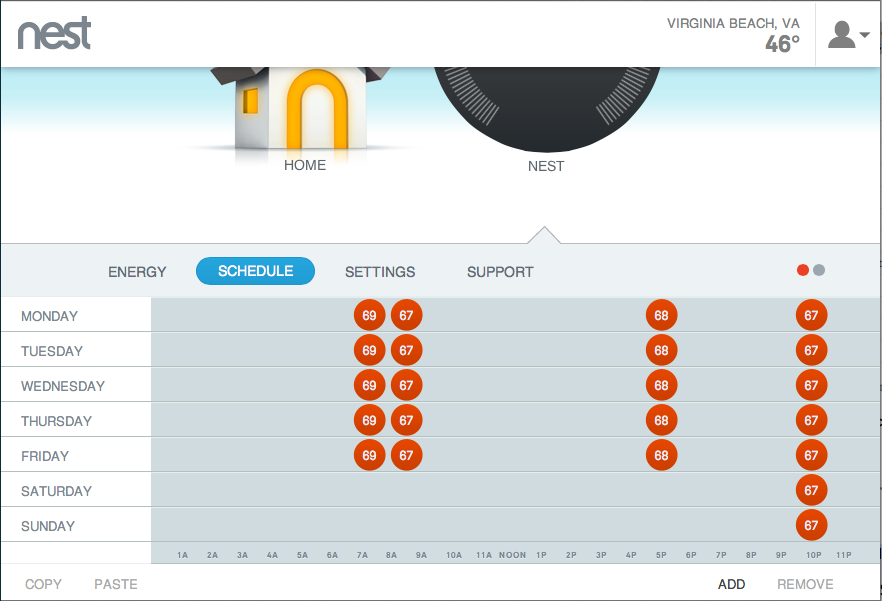 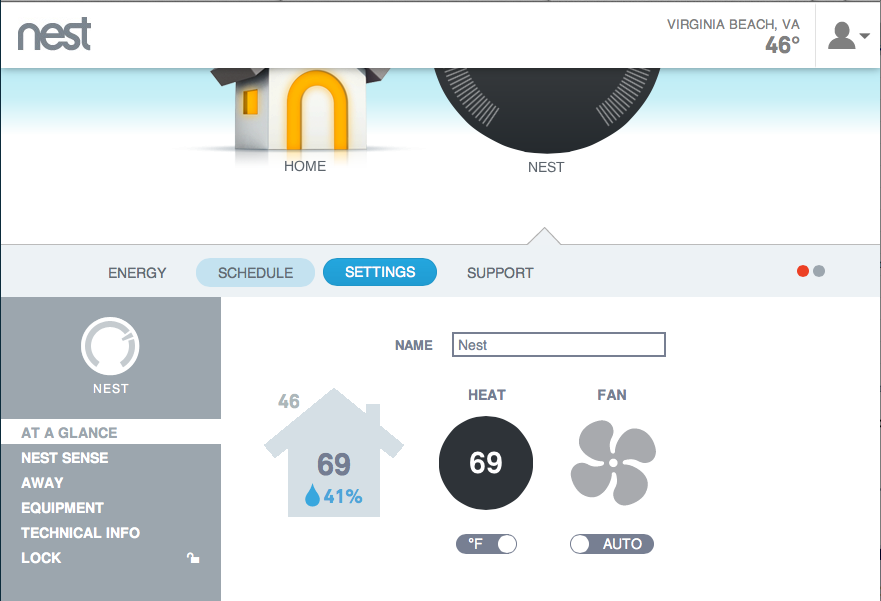 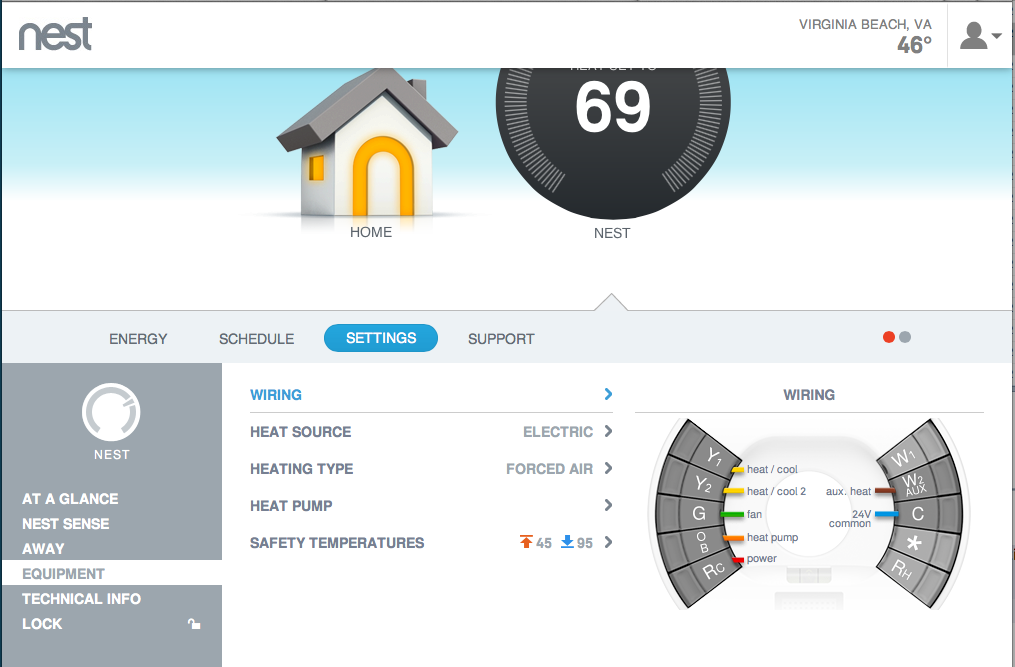 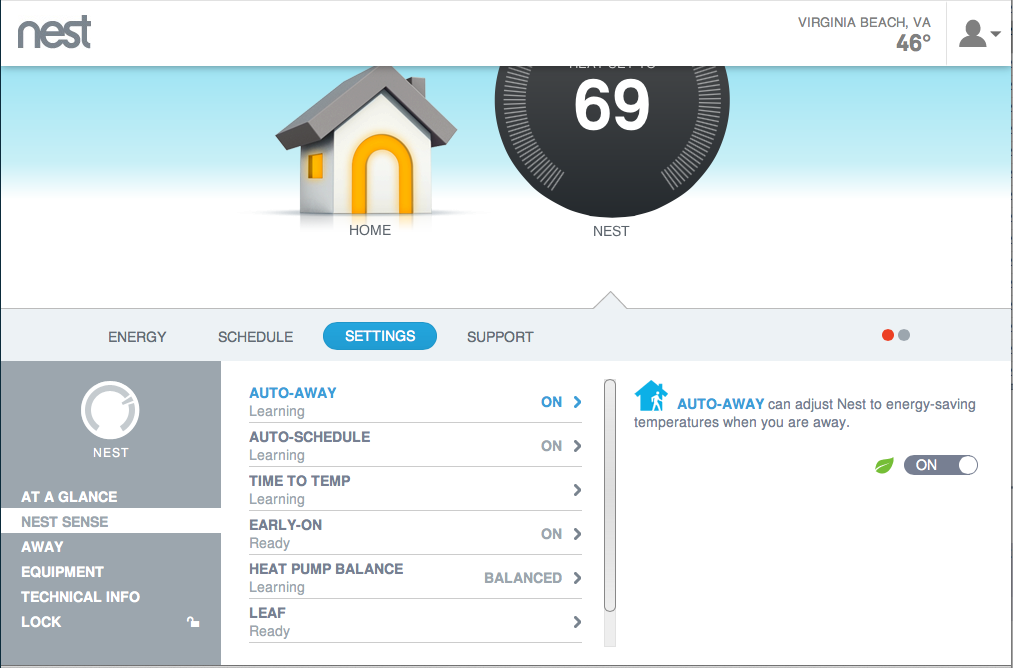 So just set your thermostat to a low temp when you're out of the house and that's that.

I think that's the point. IMO, most people, even with programmable thermostats, don't bother to lower the temperature when they leave the house. Or tell it to hold the current temperature. They just go about their business, giving the thermostat little thought.

Where the Nest (and other networked thermostats) offer an advantage, IMO, is by giving the owners regular feedback. Show them literally how many hours their system ran the night before. Give them leaf icons if they do a better job of managing their system.

For example, if I'm at work and get an invitation to hang out with buddies directly after work, it makes no sense for my HVAC system to follow the normal schedule and kick on at 4:30PM, warming the house up for my usual arrival home at 5:00PM. And it's not like I'm going to make a trip to swing home just to turn down the HVAC. With the Nest (and others like it), I can use the app/web to quickly put the system in "away" mode, which makes it ignore the regular schedule until I switch it back. That'll earn me a leaf. And as stupid as it sounds, it's somewhat motivating to me to pay more attention to my HVAC system.
Score: 9 Votes (Like | Disagree)

The Nest Learning Thermostat solves this problem by programming itself, turning itself down when you're away, and keeping track of your energy use.


How is this that much different than any other programmable thermostat that either comes with your house already or can be easily bought for less than $50? Set your thermostat once and you're pretty much done. The only time I need to go to my thermostat is when I want it a little warmer/cooler than the present temperature and I don't need an app to do that.
Score: 5 Votes (Like | Disagree)

How is this that much different than any other programmable thermostat that either comes with your house already or can be easily bought for less than $50? Set your thermostat once and you're pretty much done. The only time I need to go to my thermostat is when I want it a little warmer/cooler than the present temperature and I don't need an app to do that.


By and large, it's not much different than a properly programmed programmable thermostat. In practice, there are some differences.

First, this is obviously a premium product, and you are paying for that. That's ok - if you have a well decorated house and the thermostat is prominent, that matters to some.

Mostly though, this is intended to be as user-friendly as possible. This starts with the installation - which they go to great lengths to make this do it yourself for the vast majority of people. As compared to the instructions for a regular thermostat, this is a huge improvement. Second, it is not a programmable thermostat in the traditional sense (although it can be used that way) - it is a learning thermostat. After you install it, you set your temperatures as normal for a couple of days. From that it learns your basic schedule. It has a proximity sensor so it knows if you are home, and adjusts accordingly. It learns your habits, and continues to adjust over time.

It's of course wi-fi connected, which allows you to interact with it from anywhere - which also greatly aids any configuration you want to do so. You can set your thermostat back when you go away for a few days (or it will automatically), and turn it on remotely on your way home. It shows how much time you system is running every day to help you monitor energy usage.

Finally, perhaps the biggest thing is that it offers all of that complexity in a device that is in general, as simple to use as any old-style dial thermostat. Turn the dial and set the temperature and you will get most of the benefit of the thermostat without doing anything else.

The neat has a sensor that can tell that you are not at home and will not run the heat or AC until you return ( of which it senses that you are back).


My thermostat is on the 1st floor of the house. If I'm in the basement or upstairs for an extended period, how would the NEST know if I'm not home, or simply in another room?
Score: 4 Votes (Like | Disagree)


Serious question...what is the advantage of the NEST (aside from looking extremely cool :D) over my thermostat?


The neat has a sensor that can tell that you are not at home and will not run the heat or AC until you return ( of which it senses that you are back). It learns your schedule over time and makes up a new schedule. It adjusts to you, if it sees you are in and out frequently it adjusts how long it takes to go into Auto-Away mode. You can turn off any of the behaviors and set manual limits as needed.

A monthly report is emailed to you letting you know how much energy is used and compares it with the previous month.
Score: 4 Votes (Like | Disagree)

Way too much when the competition is 1/5 the price.

What else is out there? Serious question.

Meh. Has no real place in an Apple store as far as I can see. I'd expect to see it in my local DIY/Home Improvement shop however.

They sell it online, why not in-store? Especially if they want to reach a wider user base? People don't automatically know to go to the Apple online store and search for thermostats.
Score: 4 Votes (Like | Disagree)
Read All Comments