HERE Maps helps you feel like a local anywhere you go. See where you are, search and discover nearby places, and get a feel for the place. Collect places to remember or for later discovery. Explore new destinations and know instantly how to get there on foot, by car or on public transport. HERE Maps is based on the world-class NAVTEQ mapping data used in 90% of in-car navigation systems in the world. 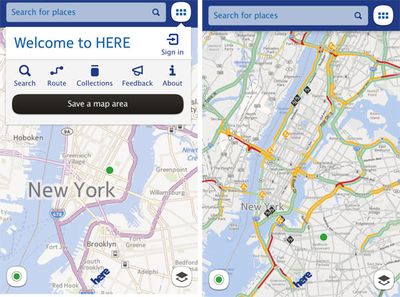 The Verge spent some time with the new app, and came away with mixed impressions.

Obviously this is Nokia's first stab at an iOS client for its new mapping service, and in many ways it's more functional than Apple's native Maps client, but for now, many of the additional features don't work as well as they ought to.

Nokia's iOS map launch is significant due to the issues many users have had with Apple's Map application that ships with iOS 6. Apple's solution has drawn considerable criticism due to incomplete data and poor coverage in many areas.

Nokai's HERE Maps is available as a free download from the App Store [iTunes link].

TimUSCA
This is just a wrapper over a web app. It's slow and text isn't very easy to read.

Personally, I'm fine with Apple Maps. But if someone is going to come out with an actual good mapping solution, it's Google.
Score: 25 Votes (Like | Disagree)

mattpreston11
Don't waste your time trying this out. Its terrible.
Score: 22 Votes (Like | Disagree)

satchow
How dare Nokia talk so smugly about Apple Maps, and how they will rescue Apple users and then go on to release this horrendous app.
Score: 17 Votes (Like | Disagree)

zorinlynx
Maps are blurry. Almost as if they're images always being displayed "zoomed in".

Geez, you'd think Nokia could do better. This is just sad.
Score: 14 Votes (Like | Disagree)

sza
it is far worse than Apple's map.
Score: 10 Votes (Like | Disagree)