Aaron Sorkin, screenwriter of the movie based on Walter Isaacson's Steve Jobs biography, has shared some details behind the structure of the upcoming film. 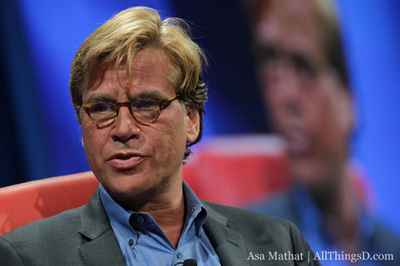 Speaking from The Daily Beast's Hero Summit, Sorkin disclosed that the entire movie "is going to be 3 scenes, and take place in real-time." Further, each of the three 30-minute scenes will take place backstage before a major product launch.

"Drama is tension versus obstacle. Someone wants something, something is standing in their way of getting it. They want the money, they want the girl, they want to get to Philadelphia - doesn't matter ... And I need to find that event and I will. I just don't know what it is," Sorkin said.

With the movie laid out in this real-time format, Sorkin seems to have written a rather unique film. It seems likely that the three major product releases that Sorkin is referring to will be the original Macintosh in 1984, the iMac in 1998, and the iPhone in 2007.

Update: According to Baba Shetty, the CEO of Newsweek, Sorkin mentioned the launches of the original Mac, the NeXT cube, and the iPod.

Update 2: The Daily Beast has posted the video of Sorkin's interview, with the Steve Jobs segment beginning around 22:30 and continuing through the end.

BornAgainMac
I want to see the Mobile Me meeting.
Score: 39 Votes (Like | Disagree)

Patriot24
Good to see all of the writers and directors of MacRumors coming out to weigh in here. Sorkin clearly has no idea how to write good stories and produce great works.

Mal
I actually really like this idea. The thought of getting a feeling for what Jobs was like before each of those major launches (without a doubt the most significant points in Jobs' career) is really intriguing. I have a feeling I'll enjoy seeing this, unless it's just really poorly done.

extradryny
I'm intrigued, mostly because I agree with Sorkin on the trouble with cradle-to-grave biopics. They only seem to work when the the character is fictional, like Forrest Gump or Jesus Christ.
Score: 12 Votes (Like | Disagree)


Make it in the format Social Network is and make it dramatic.
Score: 11 Votes (Like | Disagree)

Look, 2 hour biopics suck. You can't cram the story in there. If people really want a biopic, they'll read the book.
Score: 8 Votes (Like | Disagree)
Read All Comments

Saturday May 15, 2021 11:08 am PDT by Juli Clover
Twitter has been working on some kind of subscription service since last summer, and Jane Manchun Wong, who often digs into new features coming in apps, has shared details on just what Twitter is exploring. Twitter's subscription service could be called Twitter Blue, and at the current time, it's priced at $2.99 per month. There will be a "Collections" section that allows users to save and...
Read Full Article • 115 comments

Friday May 14, 2021 11:52 am PDT by Juli Clover
Following the discontinuation of the iMac Pro, Apple also appears to be discontinuing Space Gray "Magic" accessories that it sold separately alongside the iMac Pro. The iMac Pro was the only Space Gray Mac, and Apple designed special matching accessories for it. The Space Gray Magic Mouse 2, Magic Keyboard, and Magic Trackpad all now say "While supplies last" in small wording at the bottom...
Read Full Article • 358 comments