MacRumors reader Michael Rou has managed to get his hands on both a pre-production iPhone 5 case and a pre-production iPad mini case and posted comparison photos on Flickr. The cases were created by case manufacturers in anticipation of the upcoming models. Designs are based on leaked specs coming out of Foxconn factories. 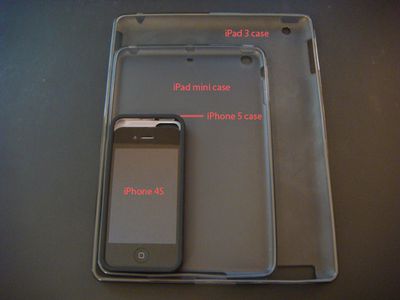 The photo does a great job showing the relative sizes of the various devices. The largest case in the back shows the size of the current 3rd Generation iPad. That iPad houses a 9.7" diagonal display. The next smaller size case is for the rumored "iPad mini". The smaller iPad is believed to have a 7.85" screen with a smaller surrounding bezel while retaining the same aspect ratio and resolution (1024x768) of the iPad 2. Rou notes that the iPad mini headphone jack is positioned at the top of the case.

Finally, there is the rumored iPhone 5 case. The iPhone 5 is believed to have 4" diagonal screen. The iPhone 5 is expected to be taller but not wider than the current iPhone 4S which is also pictured above.

Apple is expected to launch the new iPhone on September 12th at a media event. The iPad mini is rumored to come at a later date, possibly in October.

WhoDaKat
With the new Kindles, I question the wisdom of a non-Retina iPad mini. The larger version is Retina quality, and the smaller phone is Retina quality. Why not adopt it across your entire portable line. It would seem to make more sense.
Score: 16 Votes (Like | Disagree)

jonnysods
I'll take a 5 and an iPad mini thanks.
Score: 15 Votes (Like | Disagree)

Yep, the longer form factor for the iPhone 5 is still look stupid and ugly. :mad:

"on some mockups" is the key phrase here. I remain unconvinced that Apple will try to cram the 3.5mm on the bottom, right next to the speaker grilles. Ironically, I was initially put off by original iPad's 3.5mm headphone jack on top, being used to iPod Touch's on the bottom. IDK, we'll see. Sooner or later, anyways :D

For a tablet, even a mini one, a bottom jack would be a mistake. Your lap or table goes there!

Now, for a pocket device (iPhone, iPod) a bottom jack is ideal! People who don’t see why just need to hold their device in their hand: which end is closer to your arm? The bottom end of course. Now put the phone in your pocket, and unless you awkwardly re-juggle your grip in the process, the bottom end is still the end closest to your arm—which means it’s facing up, towards the pocket opening. That’s where the ‘phones should plug in if you don’t want strain on the cable.

Plus when holding a pocket-sized device up, who wants extra cable dangling up and out and away from you? Wasted cable length, just to catch on stuff. The cable should come out of the device pointed where it’s going: toward you!
Score: 7 Votes (Like | Disagree)
Read All Comments