A trio of reports out today is beginning to pin down some more rumored details for Apple's smaller "iPad mini", suggesting that the device will carry a narrower profile than previously thought and perhaps match the iPod touch's 7.2 mm thickness.

The first report comes from 9to5 Mac, which claims that the iPad mini will "look like a big iPod touch", with narrower bezels along the sides of the device paired with more traditional, thicker bezels at the top and bottom.

This iPod touch-like design makes a lot of sense for a number of reasons. For one, when compared to the Nexus 7 (and Kindle Fire, Galaxy Tab 7, RIM Playbook, etc.), this would give the iPad mini a similar, “purse-able,” and “big pocket-able” form factor but with a larger 4:3 display. The lack of a bezel on the sides will make it easier to hold too.

The report goes on to speculate that the iPad mini will offer at least a front-facing camera and perhaps LTE connectivity on some models, and a lack of significant part leaks suggests that the device may not be ready to begin shipping for several more months.

The second report comes from iMore, which backs up the earlier report and offers its own thoughts on the iPad mini's design, as well as a rendering of the rumored device.

Based on several sources, I believe that design to be an accurate representation of what the iPad mini will look like. In addition, it's my understanding that it will be the exact same thinness as the iPod touch, which is substantially thinner than the 9.7-inch iPad. The quick mockup [below] shows what I believe are accurate proportions for the iPad mini compared to the 9.7-inch iPad and the current generation iPod touch 4. 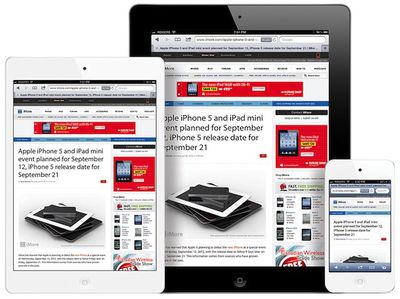 Finally, Daring Fireball's John Gruber shares his thoughts on the device, including his belief that some of the leaked rear shell photos may indeed be genuine given the similarities seen among several independent leaks. Gruber goes on to argue in support of the narrower side bezels, noting that with the device falling in between the full-size iPad and the iPod touch its design is likely to similarly fall somewhere between the two existing devices.

Should not the iPad Mini fall somewhere in between?

Gruber goes on to perform some calculations estimating the size of the iPad mini at roughly 200 x 135 mm, only slightly larger than Google's Nexus 7 despite having a screen 0.85 inches larger diagonally, a feat made possible by the narrow side bezels on the iPad mini.

But with a thickness in line with the iPod touch, the iPad mini would be one-third thinner than the Nexus 7 and thus encompass roughly one-third less volume and one-third less weight. Comparing this to the Nexus 7's weight of 340 grams, Gruber suggests that the iPad mini could weigh just 265 grams, marking a major weight savings over the full-size iPad while still retaining a reasonable display size.

Details on Apple's release plans for the iPad mini remain up in the air, but iMore appears to be standing by its earlier claim that the device will be introduced at Apple's iPhone media event reportedly set for September 12. Unlike the next-generation iPhone, it will likely be a fair amount of time before the iPad mini actually launches, with the company likely to begin ramping production to achieve availability just in time for the holiday shopping season.

an ipad mini that is thinner lighter and narrower?

blows the mind away! :eek:

one would wonder if an ipad xl would be a thicker heavier ipad?! :confused:


I would actually assume that an iPad XL would be thinner as well, since it has more surface area to fit things inside of. They're fitting an iPad into a smaller screen size, so if it actually were to be thicker even, it wouldn't be surprising.

Not as obvious as you think.
Score: 31 Votes (Like | Disagree)

Born Again
Who would have guessed??!?!

an ipad mini that is thinner lighter and narrower?

blows the mind away! :eek:

WatchTheThrone
I STILL DON'T BELIEVE APPLE WOULD EVER RELEASE THIS!!
Here's why....Apple once said they were not scared of cannibalizing their pc sales with the iPad but I believe they are scared of cannibalizing their iPad sales!! iPhone is in a whole different league to do it but an iPad mini would kill off the bigger iPad!! Why buy a 600$ iPad when you can get the mini with a slightly smaller screen for a much lower price??
iPad is killing everything right now why mess with success??
Score: 19 Votes (Like | Disagree)

Brandon-411
Would your finger not go over that tiny bezel and touch the screen?
Score: 17 Votes (Like | Disagree)

There will NEVER EVER EVER be an iPad Mini.

IF there is a New product that Apple markets, makes and sells,

to address a size somewhat bigger than the current generation 3.5" iPod Touch,

But "much smaller" than the iPad,

it will be the Next Generation iPod Touch !!!


Unless you work for Apple you don't know anything. So stop acting you do. :rolleyes:
Score: 14 Votes (Like | Disagree)


The lack of a bezel on the sides will make it easier to hold too.


How? Seems like having less inert grip area would make it tricker to hold.
Score: 14 Votes (Like | Disagree)
Read All Comments