Back in May, Apple announced that its annual iTunes Festival in London would be moving to September for 2012, with the event once again offering 30 days of free concerts at The Roundhouse. While tickets to the shows have been awarded on a lottery basis, Apple this year is offering access to the concerts with a number of live streaming options including through the iTunes Festival website, through a dedicated universal iOS app, and through Apple TV. 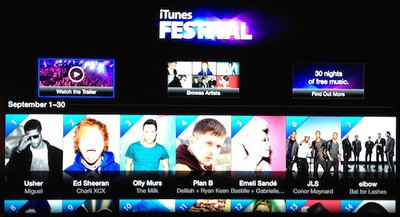 For those interested in watching the shows on Apple TV, the company has just pushed out an automatic update adding the iTunes Festival app to users' set-top boxes, making it easy for users to access the shows from the main menu of the device.

This is not the first time Apple has experimented with delivering live content directly to the Apple TV, as the company earlier this year offered a live stream of a Paul McCartney concert through both iTunes and the Apple TV.

The 2012 iTunes Festival kicks off on September 1 with Usher and runs daily throughout the month until closing with Muse on September 30.

Che Castro
What about an app to watch the sept 12 event live on the apple tv ?
Score: 5 Votes (Like | Disagree)


Seconded. This is the one thing I still want for the Apple TV.
Score: 4 Votes (Like | Disagree)

lzyprson
Just push out a full on television service already! Start your own if no one else what's come on board. I'd cut Comcast off, except for Internet, if this was possible. :apple:
Score: 3 Votes (Like | Disagree)

ian1
Nice. Now get BBC iPlayer on there (can't for the life of me understand how it's not already) and while they're at it an option to delete MLB.TV and WSJ live. What possessed them to include these in the UK version?
Score: 2 Votes (Like | Disagree)
Read All Comments

Monday July 13, 2020 6:50 am PDT by Joe Rossignol
Earlier this year, Apple agreed to settle a U.S. class action lawsuit that accused the company of "secretly throttling" older iPhone models. Now, eligible iPhone owners are beginning to be notified about their legal rights and options. Under the proposed settlement, Apple will provide a cash payment of approximately $25 to each eligible iPhone owner who submits a claim, with its total payout ...
Read Full Article • 126 comments