Yesterday, we noted that Apple was preparing to close the door completely on its MobileMe service, bringing to an end the grace period that had allowed users to retrieve their Gallery photos and iDisk files and to transition their accounts to iCloud following the June 30 shutdown of the service.

As of today, visitors to MobileMe.com are no longer given the option to convert their accounts to iCloud or to retrieve old photos and files, with Apple now simply pointing users to iCloud. 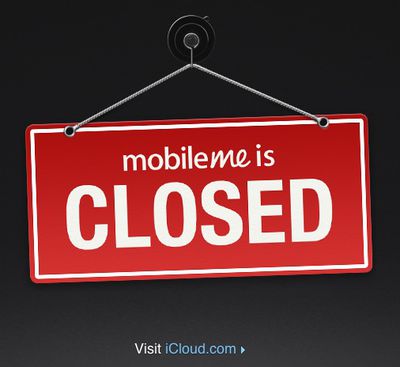 Also in line with previous announcements, Apple has officially discontinued its iWork.com service, automatically redirecting visitors to the main Apple home page. While the service was to officially shut down as of the end of the day yesterday, it did continue to function until just a short time ago.

We noted yesterday that Apple was unlikely to provide a grace period to allow users to retrieve iWork.com documents after the official discontinuation date, and that does indeed appear to be the case.

zorinlynx
Watch carefully, and observe what is happening here.

Basically, don't get too attached to iCloud, or any other "cloud service". Companies will happily shut them down when the next "new thing" comes along, leaving users annoyed as they lose services and have to move their data yet again.

The closing of MobileMe is another in the long line of "cloud service" closings in the past few years (including sites that were around before the term 'cloud' was coined) and it won't be the last.

Be a custodian of your own data. Do not trust "the cloud" as anything more than a temporary storage location.
Score: 14 Votes (Like | Disagree)

akm3
NOOOOOOOOOOOO I'VE LOST CRITICAL FILES! I HAD NO IDEA!@ :(

Long overdue. Now where is my iPhone 5?

No, it's either the iPhone 5 or the iPhone. Apple never calls anything "The New (product)", and the 3rd gen iPad was just called "iPad".

So again, you people are saying that the 6th generation iPhone that will be running iOS 6 will be called iPhone 5!? And your logic for this is what exactly? :rolleyes:
Score: 9 Votes (Like | Disagree)

MultiMediaWill
Long overdue. Now where is my iPhone 5?
Score: 6 Votes (Like | Disagree)
Read All Comments