KGI Securities analyst Ming-Chi Kuo, who has in the past offered remarkably accurate information on Apple's product plans, today released a new report addressing Apple's upcoming release plans, indicating that the company is planning for a very busy September-October schedule.

Kicking off the schedule of launches are said to be "all-new" iPod touch and iPod nano models. Details on the new models are currently slim, but the revised iPod touch is said to include the new in-cell touch display technology that has been rumored by several sources for the next-generation iPhone.

Overall, Kuo believes that strong quarter-over-quarter growth in iPod sales for the third calendar quarter will be driven by the new iPod nano rather than the iPod touch, which will see constrained supplies due to the move in-cell touch display technology.

Though all new design iPod touch and iPod nano will be launched, growth momentum will mainly come from the latter. The new iPod touch, like iPhone 5, uses in-cell panel, whose availability is limited in the initial stage. Shipments will therefore be hindered.

Apple of course did not make any substantial hardware changes to the iPod touch last September, electing to merely add white models and lower the entry-level pricing from $229 to $199. Consequently, the iPod touch retained the A4-based hardware introduced in September 2010 even as the iPhone 4S moved to the new A5 system-on-a-chip. 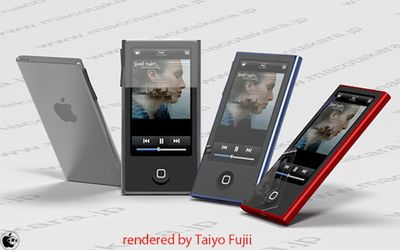 Mockup of redesigned iPod nano with oblong body and home button
Apple likewise did not offer any major changes to the iPod nano last September, merely lowering pricing and rolling out a software update for the line. One recent rumor has claimed that the iPod nano will be seeing a complete redesign with an oblong body, rectangular screen, and home button similar to that found on iOS devices. It is unclear, however, whether Kuo's sources are hearing similar details or if they only have generic information about a forthcoming redesign.
Tag: Ming-Chi Kuo
Buyer's Guide: iPod Touch (Don't Buy)
Related Forum: iPod touch and iPod
[ 52 comments ]

kenboy127
They really don't know what to do with the nano.
Score: 15 Votes (Like | Disagree)

MacIke
We have no clue but feel like we have to say something.
Score: 6 Votes (Like | Disagree)

jamesvdm
That's one of the least likely renders I've seen this year.
Score: 6 Votes (Like | Disagree)

mrsir2009
Well something needs to happen to the iPod line soon...
Score: 5 Votes (Like | Disagree)
Read All Comments