Last month, we highlighted a number of device restrictions regarding Apple's high-profile features for iOS 6, noting that many of them would not be compatible with the iPhone 3GS while smaller subsets would not be supported on the iPhone 4 and iPad 2. 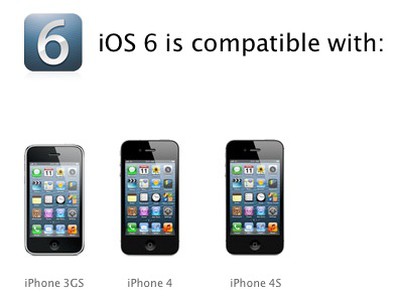 But with yesterday's release of iOS 6 Beta 3 for developers, Apple has improved feature support for the iPhone 3GS, adding shared Photo Streams and VIP mail filtering. The change was noticed by a number of iPhone 3GS users, and Apple has confirmed the removal of those restrictions on its iOS 6 preview page.

While the iOS 6 preview page previously contained eight footnotes outlining various restrictions on features, that number has been reduced to six following the release of iOS 6 Beta 3. The two removed footnotes include:

- Shared Photo Streams requires iOS 6 on iPhone 4 or later or iPad 2 or later, or a Mac computer with OS X Mountain Lion. An up-to-date browser is required for accessing shared photo streams on the web.

- VIP list and VIP and Flagged smart mailboxes will be available on iPhone 4 or later and iPad 2 or later.

The fact that iOS 6 is compatible with the iPhone 3GS at all marks a significant step for Apple, as the device was also the minimum requirement for iOS 5 released last year. But with Apple still selling the three year-old device, the company apparently felt that it needed to bring many of the new features of iOS 6 to the iPhone 3GS and is still working to add as many as it can within the constraints of the older hardware's capabilities.


The 1st gen. iPad really should never have been released with 256MB RAM. I still have mine and it runs like complete garbage with iOS 5, let alone iOS 6.
Score: 20 Votes (Like | Disagree)


How exactly is it 'super old' when its still being sold by apple as new?! Just because it has a less powerful processor it does not make it a 'super old' technology.

The 3G[s] is actually faster than the iPhone 4 in many cases as it doesn't have to push as many pixels.
Score: 19 Votes (Like | Disagree)

Edgecrusherr
Now if they can only pull the stick out of their butts and support iCloud in Snow Leopard!
Score: 14 Votes (Like | Disagree)
Read All Comments

Monday August 2, 2021 9:34 am PDT by Juli Clover
Apple is preparing for a slew of fall product launches according to new filings that showed up today in the Eurasian Economic Commission database. There are listings for new Mac and Apple Watch models, all of which have previously unknown model identifiers that indicate that they're upcoming devices. There are six new Apple Watch identifiers, including A2473, A2474, A2475, A2476, A2477, and...
Read Full Article • 116 comments