Wednesday June 20, 2012 12:09 pm PDT by Eric Slivka
A number of MacRumors readers are reporting that iCloud services are currently down, and based on the number of reports it appears that the outage is quite widespread. Apple's iCloud system status page is currently acknowledging access issues, although there is no estimate of the proportion of iCloud users being affected. 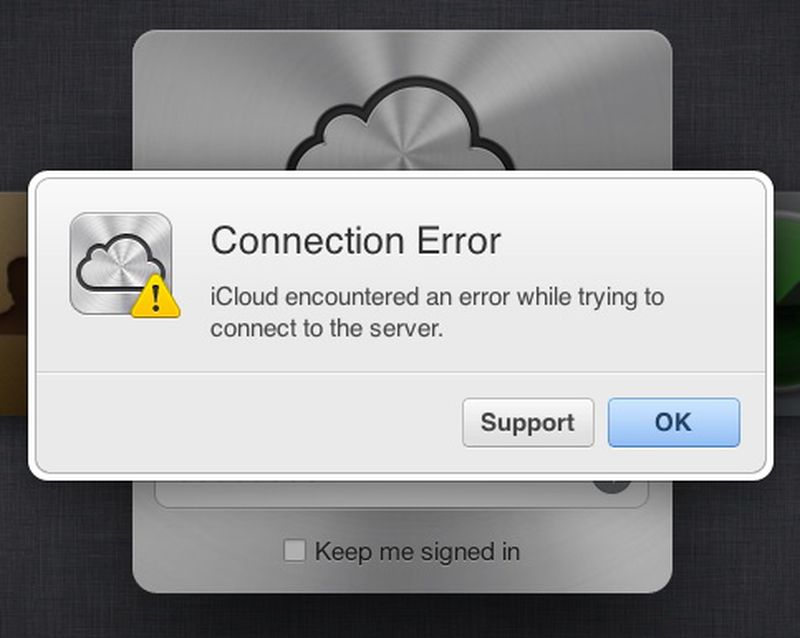 Beyond iCloud, Apple's iMessage service also appears to be down, with messages failing to go through as the sending process hangs prior to completion.

Update: Users are also reporting problems with Apple's developer portal and iTunes Store access, although pieces of Apple's online services do appear to be coming back online. We're even hearing that Apple may have experienced Internet issues for its own employees at its Cupertino headquarters.

Update 2: Apple has updated its iCloud system status page to note that "some" users are affected and that service will be restored "ASAP".

Update 3: Roughly two hours after reports of the issues began surfacing, Apple now notes on its iCloud system status page that all services are back online.

Piggie
Welcome to the world of Cloud computing when access to your data is in the hand of someone else and stored somewhere else.

You just know sooner of later it's all going to go pear shaped.

The difference is, when it goes wrong, BOY will it go wrong.
Rating: 25 Votes

blumpkin
I'm on Sprint. So everything is always down.
Rating: 24 Votes

barkomatic
This is why I prefer to have everything stored locally on my device and end up getting the highest capacity I can. A huge drawback of cloud computing is that someone else has to maintain your access.

I wonder how many people had a critical file they couldn't access in iCloud today? Good for managing contacts and calendars but not reliable enough for anything else.
Rating: 18 Votes

iEvolution
Just one of the many reasons why cloud storage is a bad bad idea.

Other reasons:
- Security
- Lack of connectivity everywhere
- Internet provider problems (lagging, busy, cant connect, etc.)
- content access based on a company rather than yourself

Yet so many people think cloud computing is the future, if it is we're in for a horrible future.
Rating: 9 Votes

You mean welcome to the world of the Internet... Access to your data is always in the hands of someone else. Some less obvious than others.

Why would I trust a 3rd party with my "only" copy or my "only" means to access my data? That would be beyond dumb.
Rating: 8 Votes

skywalkerr69
I have no iMessage, this reminds me of all the times blackberrys servers are offline.
Rating: 8 Votes

vrDrew
Nothing like a minor (temporary) service interruption to bring out the Applehaters; conspiracy theorists; neo-Luddites; and cranks.

Being without electricity or water for a couple of days is a problem. Not being able to stream Call Me Maybe from your iCloud account for a couple of hours? Not so much.
Rating: 7 Votes

Siri has taken over! :p

Welcome to the world of Cloud computing when access to your data is in the hand of someone else and stored somewhere else.

You just know sooner of later it's all going to go pear shaped.

The difference is, when it goes wrong, BOY will it go wrong.