As noted by AllThingsD, Apple and Time Inc. appear to have settled their long-running differences over digital magazine subscriptions, with Time launching iPad-only subscriptions for its magazines through Newsstand. According to a press release from Time, the offering addresses all 20 of its consumer magazines, which include Fortune, People, Sports Illustrated, and Time. 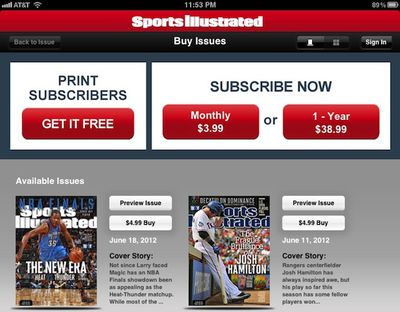 Time was prepared to launch iPad subscriptions for Sports Illustrated two years ago, but Apple refused to allow Time to bill subscribers directly rather than going through the iTunes Store mechanism where Apple would keep 30% of the revenue and limit publisher access to subscriber information. As a result, iPad users were initially limited to purchasing titles on a single-issue basis.

Nearly a year later, Apple and Time reached an agreement to allow print subscribers to receive free access to the iPad editions of the publisher's major magazine titles. But digital-only subscriptions remained off the table even as other major publishers such as Hearst were accepting Apple's subscription terms and rolling out their own offerings.

AllThingsD notes that it is unclear what changed between Time and Apple to now allow full-fledged digital subscriptions, including whether Time simply relented or if it was able to obtain some concession from Apple.

It could be as simple as Time Inc. trying to boost sales, which haven’t been stellar recently — a slump at its People magazine title is particularly troublesome for the publisher. Or perhaps parent company Time Warner got some other concession from Apple for one of its other units, like HBO or Turner.

Digital subscription pricing for Time titles varies, but a flagship title like Sports Illustrated is being offered at a $3.99 monthly rate or a $38.99 annual rate, a significant discount from the $4.99 single-issue pricing for the weekly magazine.

Am I one of the few that still doesn't use Newsstand?

I think the majority don't use it. I keep looking at iTunes o see if anything pops up that want to subscribe to, but its a lot of fringe/garbage magazines. I just don't understand why digital editions of newspapers & magazines cost as much as print when they have nowhere near the production and distribution cost.
Score: 6 Votes (Like | Disagree)

Am I one of the few that still doesn't use Newsstand?


Nope. I think there are a few who still don't. I have it for just a few magazines that are not offered via zinio. I like it, no complaints. Wish the prices were a little better than their printed version. But that is for another topic. :)
Score: 4 Votes (Like | Disagree)

Apple...
Am I one of the few that still doesn't use Newsstand?
Score: 4 Votes (Like | Disagree)


If, as a publisher, you publish a hardback or paperback novel priced at £9.99, Waterstones (as an example) will not pay a penny more than 50% of the cover price to buy it from you, And, in a lot of retail chains, including the larger franchises of newsagents, the same applies. Consequently, Time will get nowhere near 100% of the net price for a printed magazine, more like 50% (the newsagent pockets the rest), plus they STILL have to fund printing and distribution. Consequently, Apple only taking 30% starts to look very inviting indeed.
Score: 3 Votes (Like | Disagree)

Or, another way to think about this: if Apple took 5% or 10% instead of 30%, the pricing offered to us could be cut by 20-25% and Apple could still make money being a digital distributor for these companies. 30% of gross is a LOT of new cost.

I was just wondering. The only magazine I read from time to time is Reader's Digest, but I get the print version of it in the mail.


I second that, I can still subscribe to most magazines for $6 a year (Details, Spin, Fast Company, GQ, etc...) and a little more for weekly ones, why would I pay 1000% more just to see it on my iPad?
Score: 2 Votes (Like | Disagree)
Read All Comments