More than a year after Amazon introduced its Cloud Drive and Cloud Player services as it was racing to beat Apple's iCloud services to market, the company has now announced the release of a native Cloud Player app [App Store] for iPhone and iPod touch.

Customers using the Amazon Cloud Player App can stream, download, and manage their music in the cloud, eliminating the need to download files before playing them. With this new app, customers have full access to their Cloud Player music libraries and also can seamlessly add playlists that are currently on their iPhone or iPod touch. 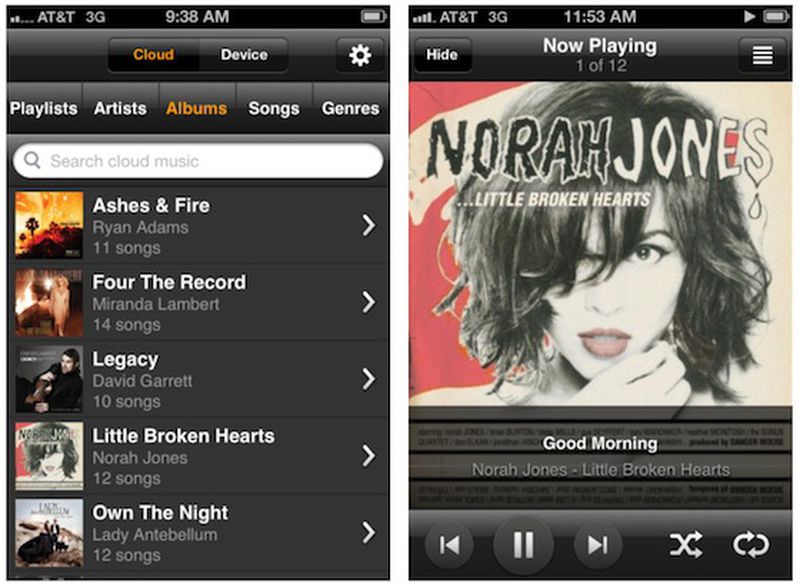 iPad access to Amazon Cloud Player has been available since last July as a device-optimized web player, with the iPhone and iPod touch also having had partial compatibility.

malnar
This thing's great. So much faster than iTunes Match, which is often a massive slug when downloading or even just loading the database. AND it loads all the artwork. Match is a complete mess. I may be switching over to this.
Rating: 2 Votes

chrmjenkins
Nice. Music on amazon is often cheaper so it would give me a way to buy the music cheaper and listen to it instantly before I got home and was able to sync.
Rating: 1 Votes

I don't believe they censor their music like iTunes music match does either....a bug Apple has been promising to fix for months and still hasn't.

MM was the biggest waste of $25 I ever spent.
Rating: 1 Votes

clayj
Amazon has one big advantage here over iTunes Match -- they do PROPER streaming, not the download-on-demand-and-then-play streaming that iTunes Match uses (which ends up using up space on your device).
Rating: -1 Votes
[ Read All Comments ]