Tim Cook at D10: "We're going to double down on secrecy on products." 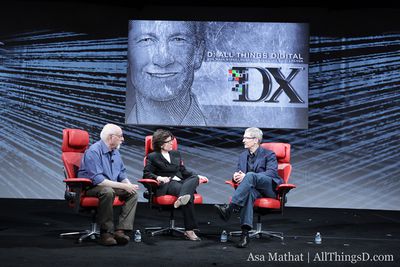 Image from AllThingsD
Walt Mossberg and Kara Swisher spent time interviewing Apple CEO Tim Cook tonight on a range of topics. The interview took place at the All Things D conference in Rancho Palos Verdes, California. We have a full transcript of the interview available.

When asked about what Cook has changed at Apple, he discusses that he plans on doubling down on secrecy on products.

We're going to double down on secrecy on products. I'm serious.

Cook, however, does goes on to say that he is going to be the most transparent company on other topics such as social change and supplier responsibility.

Apple's secrecy surrounding its product line is legendary. Apple cofounder Steve Jobs even identified secrecy as one of the specific tenets at Apple that has been responsible for its success. Apple's ability to keep products secret has been hampered in recent years by Apple's reliance on Foxconn and other 3rd party manufacturers. Just earlier today, part leaks seem to have revealed the look of the next generation iPhone.

ECUpirate44
We're going to double down on secrecy right after we let go of a few fake pics of the New iPhone to get all you blogs to stop talking about the Galaxy S3.
Score: 28 Votes (Like | Disagree)

lifeinhd
Oh no! He's going to put MR out of business, and then how shall I waste away the hours at work? :D
Score: 22 Votes (Like | Disagree)

We have one phone with one screen size and one resolution. It's pretty simple if you're developing for this platform.


This was a very interesting quote to me in light of the recent rumors about a new iPhone screen aspect ratio. It would seem to refute that rumor.
Score: 13 Votes (Like | Disagree)

LEgregius
"The more you tighten your grip, Cook, the more star systems will slip through your fingers."
Score: 11 Votes (Like | Disagree)

Hear that, China? You're about to feel the wrath of Cook..
Score: 11 Votes (Like | Disagree)

afin
I feel that secrecy adds to the appeal. It's all in the chase...
Score: 8 Votes (Like | Disagree)
Read All Comments