Part leaks from the next-generation iPhone are beginning to ramp up, with component vendor SW-BOX.com having recently added a new headphone jack/earpiece/Wi-Fi cable part claimed to be from the device (via Cydia Blog). The new part joins a claimed micro-SIM tray that surfaced on the site several weeks ago and home buttons that appeared on several sites late last month. 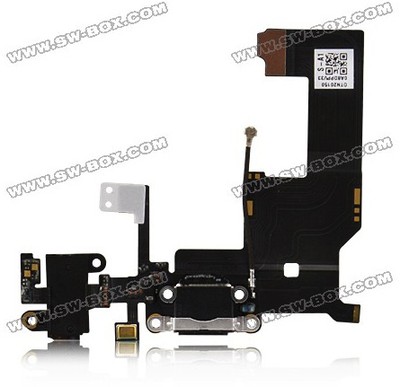 If the new part is indeed legitimate, it does represent a significant departure from the component organization in the current iPhone. In the iPhone 4 and 4S, the headphone jack, volume buttons, and mute switch are grouped together on a single component, while this new part associates the headphone jack with the earpiece speaker and Wi-Fi cabling.

It is not terribly unusual for Apple to tweak the organization of components, and the new part leak offers essentially no information on any potential changes to the device's form factor, but with part leaks beginning to accelerate it may not be long before more substantial parts begin showing up.

Update: The center feature of the part appears to be more reminiscent of the dock connector rather than the earpiece, suggesting that the headphone jack may be moving to the bottom of the next-generation iPhone, as has been the arrangement in the iPod touch.

mklnz
I wonder why there hasn't been any MBP parts / news recently :(
Score: 24 Votes (Like | Disagree)

Without Steve Jobs the iPhone is doomed. This design looks like a real mess, thanks Tim.


Tell me more about how you already seen what the new iphone will look like...

AngerDanger
If you can make sense of that picture, you could win the grand prize.
Score: 16 Votes (Like | Disagree)

Looks silly. If the iPhone 5 looks anything like that it's going to flop badly.

Without Steve Jobs the iPhone is doomed. This design looks like a real mess, thanks Tim.


I don't know why people are voting these down--funniest comments I've seen on MR in a while. You down-voters need to get a sense of humor. Sheesh. :rolleyes:
Score: 11 Votes (Like | Disagree)
Read All Comments

Monday July 13, 2020 6:50 am PDT by Joe Rossignol
Earlier this year, Apple agreed to settle a U.S. class action lawsuit that accused the company of "secretly throttling" older iPhone models. Now, eligible iPhone owners are beginning to be notified about their legal rights and options. Under the proposed settlement, Apple will provide a cash payment of approximately $25 to each eligible iPhone owner who submits a claim, with its total payout ...
Read Full Article • 127 comments