Last month, it was discovered that Apple quietly tweaked the 16 GB Wi-Fi iPad 2, equipping the device with a smaller 32-nm die shrink of the A5 system-on-a-chip previously used in the line. The tweaked iPad 2 carries an internal identifier of "iPad2,4", which was first spotted in an iOS 5.1 beta back in November, but at the time it was unclear what the model represented.

A similar die shrink of the A5 was found in the new Apple TV, and it appears that Apple made the move in order to test out production of next-generation chip processes in lower-volume devices. The A5X used in the third-generation iPad continues to be based on a 45-nm process. 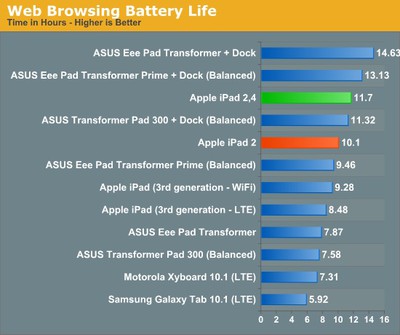 Unfortunately, Anandtech notes that there appears to be no way for customers to ensure that they receive one of these revised iPad 2 models for their $399 purchase, as there are still a significant number of the original iPad 2 models in circulation and they can not be distinguished based without opening the box and turning on the device.

What I want to know is who the hell played infinity blade for 8 hours straight?
Score: 31 Votes (Like | Disagree)

For a forum called "Mac" rumours there doesn't seem to be that many Mac rumours...

Apple is a lot more than just Mac when this site was founded in 2001. Get over it.

There simply isn't many macrumors... Except a thinner MacBook Pro
Score: 26 Votes (Like | Disagree)

I am gobsmacked...just bought ipad3 two weeks ago now iPad2 variant is better than iPad 3.... I am feeling i'm cheated :mad:


Better in one metric. You still have a retina display, and for me that's worth it.
Score: 17 Votes (Like | Disagree)

I am gobsmacked...just bought ipad3 two weeks ago now iPad2 variant is better than iPad 3.... I am feeling i'm cheated :mad:


You have a screen with 2x the resolution both vertically and horizontally, quad core graphics, and incredible optics. I would not say the iPad 2,4 is better, just running even leaner and meaner than before!
Score: 15 Votes (Like | Disagree)

For a forum called "Mac" rumours there doesn't seem to be that many Mac rumours...


I know, let's get back to info about the forthcoming PowerBook G5!
Score: 12 Votes (Like | Disagree)

Unfortunately, Anandtech notes that there appears to be no way for customers to ensure that they receive one of these revised iPad 2 models for their $399 purchase, as there are still a significant number of the original iPad 2 models in circulation and they can not be distinguished based without opening the box and turning on the device.


That's exactly why Apple was hush hush about it. They don't want people returning iPad2's if they don't get one with the newer chip.
Score: 10 Votes (Like | Disagree)
Read All Comments