While Apple has pushed out several software updates to detect the Flashback malware and remove it from infected systems, Symantec noted late yesterday that over 100,000 machines remain afflicted by the issue as detected by their sinkhole operation to redirect server traffic. 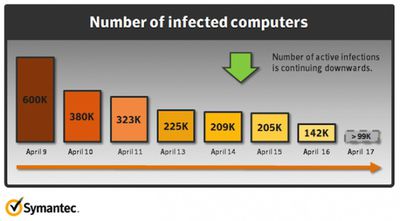 Symantec pegged the number at approximately 142,000 as of Monday, listing a rough estimate of "over 99,000" as yesterday's data was still coming in. Those numbers are down from a peak of over 600,000 machines two weeks ago, but a substantial number of machines are still infected by the malware.

The statistics from our sinkhole are showing declining numbers on a daily basis. However, we had originally believed that we would have seen a greater decline in infections at this point in time, but this has proven not to be the case. Currently, it appears that the number of infected computers has tapered off, but remains around the 140,000 mark.

As there have been tools released by Symantec and other vendors in the past few days concerning this threat, the infection numbers should have seen a dramatic decrease by now.

Symantec also takes a look at the domain name generator that allows infected machines to connect to their command-and-control servers to receive instructions. The generator uses a list of 14-character strings rotated each day, coupling each string with one of five top-level domains (.com, .net, .info, .in, or .kz) to find its instructions.

The report also claims that Flashback-infected systems can receive updated command-and-control server locations through Twitter, although no details on that process are provided. A similar claim was made for earlier versions of Flashback, although there has apparently been no demonstration of the Twitter delivery method actually being used.

chrono1081
I don't understand the concern everyone has. One trojan that infected 1% of Macs (thats right, 1%) and is easily fixed with an update compared to over a million known malware variants on Windows systems is nothing.
Score: 7 Votes (Like | Disagree)

Santabean2000
Seems like a lot, but I guess not as a percentage. Still, new threats, I fear, will soon become the norm.

It was good while it lasted.

As I installed today's Flash update, I thought to myself: how am I supposed to know if this is really Flash, or if this is actually a trojan?

Don't act on someone else's initiative. Act on your own.
If you see on some news site, or via some popup dialog, that Flash (or any other software) is updated, then go to the download site by yourself, or invoke the update process provided in the software.

Let's say that Software Update says that there's some software that needs to be updated. Read what the update is about and click [Cancel]. Then, you go to Software Update by your own action and run it. If it says the same thing as before, you go ahead and upgrade.

The first instance COULD've been a Trojan that just happens to mask itself as Software Update, or Flash updater, or some other updater/installer.
But, if you run through the process by your self manually, and according to standard procedure, you won't invoke any Trojan.

…probably. If you follow this, you won't get infected by ANY trojan that I know of and you won't get phished, or scammed by any email.
Score: 5 Votes (Like | Disagree)

caligomez
Do we really need antivirus software for Macs? I mean, assuming the growth of the platform, and that more and more malicious programs will be written.. I consider myself pretty smart in avoiding infection, but it only takes one savy developer to trick you with some method you didn't anticipate..

I don't have any type of security software.. Should I? If so, which is the best for Mac?
Score: 5 Votes (Like | Disagree)

You know I don't like to spread conspiracy garbage. But on this topic every story says these are estimated numbers or a best guess. Even still 100,000 is less than 1% of Mac users. How is this even an outbreak or panic like the media is portraying? I've gone around and checked about 100 of the machines at my work not a single one of them was infected. None of my friends have been infected and none of my home machines have been infected. So I'm starting to believe this is all BS that the antivirus companies are putting out so that you purchase their software subscriptions. I just feel they really want to be in the Mac market and capture Windows switchers.

Conficker was a fairly sofisticated worm with implementations of quite a lot of different attacks. In that light, 1% for the comparatively much simpler Flashback malware is actually very widespread. The two month delay in releasing the fix was probably a big contributing factor along with the widespread belief that Macs don't get viruses.

It great to see that the number has gone down but 100 000 infected is still nothing to sneeze at (excuse the punnage).
Score: 4 Votes (Like | Disagree)

1% who has reported the issue, which is about the amount of mac users who join forums.
The other 99% may be infected and may not know because they have been told the mac is "safe" and protected from such things.

No the 1% is the actual number of infected whether they know it or not.

They don't measure it by the amount of people reporting it, they measure it by seeing what the trojan is doing.
Score: 4 Votes (Like | Disagree)
Read All Comments