Late last year, Apple was fined $1.2 million by Italian regulators over its marketing of AppleCare extended warranty services for its products. The regulators ruled that Apple was not adequately disclosing standard two-year consumer protection coverage available under European Union laws. Apple last week lost its appeal of the ruling, although another follow-up hearing is scheduled for early May. 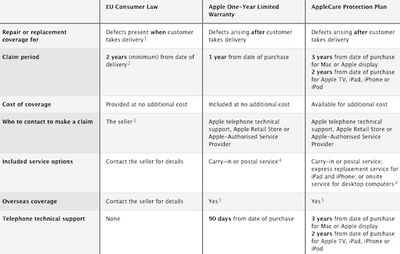 - Apple's warranty is good for one year, while EU protection lasts for two years.

- Apple's warranty covers defects that arise at any time during the warranty period. EU protection laws generally require consumers to prove that a given defect was present at the time of product delivery.

- Apple's warranty coverage applies only to Apple products. EU protection laws require sellers to support any products they sell, so the EU coverage would apply to both Apple-branded products and third-party products sold by Apple.

Apple's document also provides a number of links and clarifications to help consumers understand exactly what is covered by each warranty layer, enabling them to better determine whether AppleCare extended warranties might be a desirable addition to their purchases.

This helps explain why products are more expensive in the EU than in US. Other than the VAT being included in the price. Longer warrantees and consumer protection is not free.

Apple has nothing to worry about if their products are of high quality.

You do understand that the EU warranty works like this: If you buy an iPad and it has a dead pixel after 23 months of use.... you must PROVE that that dead pixel was there on day 1.

There is no way to do this. The 2-year EU warranty is useless.

With AppleCare, if the dead pixel shows up after 23 months of use, you get a new iPad. AppleCare seems much better.

Not really, you don't have to provide real evidence. All you must do is state that you have used a device normally. If suddenly the device completely stops working after only 1,5 years (and it isn't your fault), than your product must still be replaced for free.

Again, you do not have to provide actual evidence.

-----------------------------------
And another misunderstanding: warranty laws are different in most EU member states. For example, in the Netherlands you have got the 'right of a proper product', which means you can actually still claim warranty up to five years after you bought a product (it depends on pricing, how it is advertised (high quality or not), etc.)
Score: 14 Votes (Like | Disagree)

- Apple's warranty covers defects that arise at any time during the warranty period. EU protection laws generally require consumers to prove that a given defect was present at the time of product delivery.

It's more like that customers have to prove that the defect isn't his or her fault after six months. You can do this by simply stating you used the device normally. You don't have to provide actual evidence.
Score: 12 Votes (Like | Disagree)

Apple simply says that they have always respected the EU laws and never failed to honor the EU mandated warranties.

When something is broke after a year they will *always* point to the one year warranty. To get them comply with the law it always involve a consumer organisation or a threat with a lawsuit. There is a reason why different consumer organisations now bundled forces and imho rightfully. Apple is one of the few companies that doesn't comply with the law completely regarding warranties.

The fact how Apple handles warranty is even used as a marketing point by some shops why you should buy Apple products from them instead of buying them at Apple stores. The german Mediamarkt (which operates in a lot of European countries) explicitly advertises with it 2 year (and the funny thing it is really the law that mandates that) warranty in comparison with Apple. When I bought my new Ipad this week the salesperson even bragged about their 2 year warranty which I wouldn't get with Apple.

The whole way they explain the EU warranty is kind a shady and even borders to FUD. When your products gets defective 1,5 year after you bought it you are entitled to a repair or a replacement. The reason is that if something breaks it is because of a shady component that has been there from the beginning. As a consumer you don't need to literal proof that the defect was there from the beginning because common sense dictates that. It is only after you abused a product that you lose that right.

And no you aren't entitled to a "free" upgrade and it isn't so that when an item is repaired or replaced you are entitled to another 2 years of warranty at that point. When something breaks a company has the possibility to repair the item or in the situation it can't be repaired replaced by the same product or a product with the same possibilities.

And in a lot of countries the law even goes further as there are directives where the law expect that certain products have a certain life expectancy. A laptop shouldn't break after a year for example which from my POV seems very logical.

No idea why this was voted down.

I'm European and it sometimes really baffles me how somebody from more then 5000 km away tend to have to educate me how things are handled here or how things are going here. I think as a citizen I know the local laws and situations a bit better. Maybe that is the reason.
Score: 9 Votes (Like | Disagree)

Europe regulation bothers me. Now it's just them saying "Hey! Look at us, big scary Apple! We're still relevant!" when any European country outside of Germany is totally hosed.


You mean Apple should always abide by american rules and regulations, no matter in which country they sell their products in?
Score: 8 Votes (Like | Disagree)

No.
You do understand that the EU warranty works like this: If you buy an iPad and it has a dead pixel after 23 months of use.... you must PROVE that that dead pixel was there on day 1.


No, you don't have to prove that the defect existed on day one
Score: 8 Votes (Like | Disagree)

any European country outside of Germany is totally hosed.


LOL. You watch too much Fox News. Actually, in the UK, we're not doing too bad thanks :P At least I am anyway.
Score: 6 Votes (Like | Disagree)
Read All Comments