Digitimes has been one of the biggest sources of rumors regarding a potential "iPad mini" carrying a 7.85-inch screen that the publication says Apple is targeting for release later this year. Digitimes now points to a new report [Google translation] from Taiwanese newspaper United Evening News making similar claims and outlining a number of companies making up Apple's supply chain for the device.

According to the report, Apple will be utilizing Pegatron as its assembler for the device, forgoing its main partner Foxconn for this project. Apple and Pegatron do, however, have a long-standing relationship with the assembler already contributing to iPhone production and rumored at several points to be involved in iPad 3 production as well. 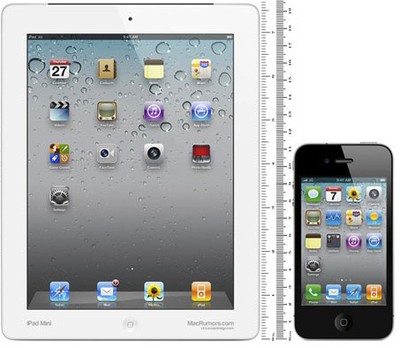 Mockup of 7.85-inch iPad next to an iPhone
On the display side, the report claims that LG Display will be responsible for 70-75% of the workload for the smaller iPad, with AU Optronics handling the remainder. Samsung, which is a key part of Apple's supply chain but with which Apple is currently engaged in a massive patent dispute, has reportedly been shut out of display production for the new device. The report also claims that Radiant Opto-Electronics and Forhouse will be contributing backlight components for the 7.85-inch iPad.

The newspaper had previously named LG and AU Optronics as display suppliers for the device, claiming in October that Apple was planning to launch the smaller iPad early this year. The Wall Street Journal weighed in last month with its own claims that Apple was working with those companies on the project, but noted that there is no guarantee Apple will ever release the device.

GoGa
What is peoples obsession with having bigger phones and smaller tablets? I don't get it.
Score: 43 Votes (Like | Disagree)

...the publication says Apple is targeting for release later this year.

Glideslope
iNote. It will sell Millions. DO NOT underestimate the power of "purse compliant". :apple:
Score: 16 Votes (Like | Disagree)

IlluminatedSage
for those of you questioning why Apple ought to do this is:

1- One size does not fit all, many smaller tablets are more affordable and work well.

2- kids can play and do well with smaller sizes, in my house, it would be great to have a smaller device my kids can share to learn with and more.

3- cost. these devices cost alot, more than some competing full sized laptops. why not do it smaller and bring prices down. people need more cost effective options.
Score: 9 Votes (Like | Disagree)

Bchagey
I doubt it.
Score: 9 Votes (Like | Disagree)
Read All Comments