Earlier this month, the staff at Munich, Germany's Apple Store Rosenstraße formed a "Betriebsrat" [Google translate] -- an official labor council that focuses on the working conditions within the store.

It’s the first such council within Apple’s Germany stores... and will deal with issues such as routine overtime, sales pressure from management, high noise levels within the store, and other health and safety matters... Employees will eventually expand the councils to all eight Apple stores in Germany. 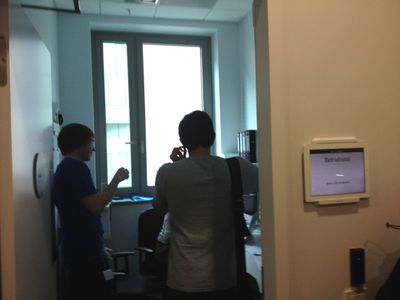 A tipster sent us this photo from within the store, showing the office the Betriebsrat has taken within the store. The office, according to the tipster, originally belonged to the Store Leader. The iPad to the right of the entrance says "bitte rein kommen!" which translates to "please come in!"

The picture appears legitimate, with the circular sign on the door matching those within other Apple Stores we've seen, and the GPS data within the photo matches the location of the Apple Store Rosenstraße in Munich. We have removed the data from the picture for privacy reasons.

Last year, it was reported that Apple Store managers were participating in "union awareness" training, covering the legal dos and don'ts of dealing with unions. While not an actual employee union, the betriebsrat is a legally protected entity in Germany.

JD92
Great news. Anyone who's worked in both a unionised and non-unionised retail environment will know how big a difference a union makes.
Score: 4 Votes (Like | Disagree)

WTF, a door sign with a iPad... is obviously excessive.


On the upside, maybe one can play Angry Birds while waiting outside.
Score: 2 Votes (Like | Disagree)

...if a company has more than 18 full-time employees, they have to have one full-time worker councilman. Also, it is illegal to block unions or employees councils from forming. Management has no access to meetings without invitation of these meetings (usually held monthly with all staff) and if you are a German Incorporated, one of the board members has to be a councilman if you have a certain number of employees.

Now, you might see this as way too intrusive, but the reality of things is that having your workers closely involved in management makes them actually support the company better in hard times. The employees council is informed about the numbers this way and if the only thing saving the company is cuts in pay or unpaid overtime, they might even agree to that to save jobs. Sure, it is a bit more complex with unions involved etc. but if you look on which countries came well through the last crisis, Germany is one of them. And if you thing that the influence of workers in bigger companies will lead to a salery hike, compare what a well-trained and skilled car manufacturer worker makes in Germany to hte one in the US: Last I read was less than 60% of the US worker. The trade off is more secure jobs, a career path, and a lot of social services (such as health insurance including family with no deductible and no cap, vision, and dental included).

If you think this all comes from Socialism, you are wrong. Most basics of the social laws were formed under the Emperor in 1872/73 and they survived 2 world wars.

By the way, these regulations brought down company ventures like WalMart who tried to push their ideology into a German substity and failed after class action law suits for violating privacy laws.
Score: 2 Votes (Like | Disagree)

Last time I was in that store I snapped a picture of the stair case. Nothing out of the ordinary, the same apple stairs you see at most stores and two "guards" made me delete it from my camera. They weren't store employee's, they were dressed completely different.


That's certainly illegal in Australia and the US. Not sure about Germany. In any case it's pretty irrelevant as it would be easily recovered in a few minutes using freeware.

JoeG4
Cool. Funny note, I've seen digital door signs used before (they use them for the meeting rooms in my uni's community building).. just not that often. Funny, a piece of paper would have sufficed eh? XD
Score: 2 Votes (Like | Disagree)
Read All Comments