Last week, a firestorm erupted over the publicization of AT&T policies that can result in users on grandfathered unlimited data plans seeing their data speeds throttled after burning through as little as 2 GB in a month.

Early reports on the policy, which went into effect last October as intended to affect the top 5% of users on unlimited plans, had pegged the carrier as enforcing throttling on customers using in excess of 10 GB, but the limit appears to have been coming down over time. The lower limits have left some wondering why they are continuing to pay for a $30/month "unlimited" data plan that is throttled after 2 GB while AT&T happily sells customers a 3 GB "limited" data plan for the same price. 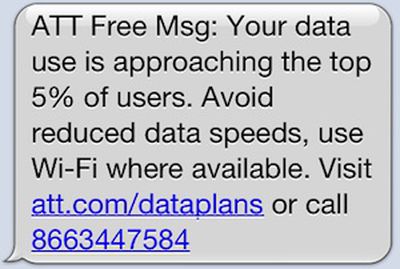 AT&T does note in a support document on its website that that top 5% of data users did average approximately 2 GB per month as of last August, although that number does vary month-to-month and market-to-market.

AT&T is not, however, automatically throttling users on unlimited data plans once they reach that "top 5% level" in the neighborhood of 2 GB, as The New York Times reports that AT&T only throttles these customers when they reside in areas with shortages of network capacity.

[AT&T spokesman Mark] Siegel said that even if you do exceed 2 gigabytes of data usage and qualify as one of the top 5 percent, that doesn’t absolutely mean you’re going to be throttled. AT&T will only reduce speeds for the top 5 percent of users in areas where network capacity or spectrum is insufficient, he said. In other words, throttling is done on a case-by-case basis, not based on a hard number, according to AT&T’s claims.

“There’s a very good chance you wouldn’t be slowed,” Mr. Siegel said. He added that in the last month, less than 1 percent of AT&T smartphone customers were affected by the policy.

Still, AT&T hasn't addressed observations that "unlimited" data users are essentially receiving less data service than 3 GB "limited" data users are for the same price. While unlimited customers can technically continue to go beyond 3 GB without incurring extra charges as a customer on a limited plan would, AT&T's throttled speeds are generally so low as to be considered nearly unusable by many.

Ultimately, many users of the users still on AT&T grandfathered data plans are viewing enforcement of throttling at 2 GB as primarily an effort to force them into giving up their plans and converting to the tiered plans AT&T rolled out in 2010.

There should only be unlimited (truly unlimited) plans.

At the gas pumps are meters for measuring the amount of gas dispensed. This is verified by an independent 3rd party. This is prevent gas station owners (etc) from cheating customers.

If you're paying by the mega byte, then this measurement should be confirmed by an independent 3rd party. With data like this, this is a big problem.
But not for unlimited plans.

So either the carriers get measured to independently confirm data usage or ... unlimited plans only.
Score: 8 Votes (Like | Disagree)

Yeah, I've thought it through. I love seeing these pathetic whiners moan and groan when the solution is right there in front of them. ATT has made it abundantly clear that "unlimited" will never again get more than those on a tiered plan. Yet some people are so dumb that they continue to hope. Hilarious!


How much is AT$T paying you for trolling these boards? Begone!
Score: 7 Votes (Like | Disagree)

David G.
Why is AT&T effectively waging an advertising campaign against themselves and for Sprint?
Score: 7 Votes (Like | Disagree)

Here's how to file complaints with the Federal Trade Commission (FTC) and Federal Communications Commission (FCC). It's really easy to do, and just takes a moment online.

After you do this, be sure to drop by AT&T's Public Policy Twitter Feed where you can leave them a nice courtesy tweet about it:
@ATTPublicPolicy
http://twitter.com/ATTPublicPolicy

For "unlimited" data plan customers, AT&T has provided no proof of the accuracy of its internal bandwidth meters, and thus there is no consumer-transparent basis under which this "top 5%" throttling practice is determined and implemented. The FTC needs to investigate this as it is a deceptive business practice in which a plan is marketed as "unlimited" but is throttled to the point of useless (as the video shows) with no clearly defined criteria based on users who can travel frequently from region to region.

The idea of a "market" being based on your "address" is an unfair business practice. When someone travels from NYC to LA, etc. there's no way to label them a top 5% user based on a specific region as AT&T appears to be doing. How can AT&T even claim this? Does the so-called congestion travel with a customer?

Aside from there being no proof of congestion in the first place, there's no way to know if AT&T is really doing the "top 5%"... make AT&T prove it.

AT&T is deceptively marketing an "unlimited" data plan which is throttled to effectively useless speeds based on video evidence. You can point the FTC to this YouTube video:


This complaint also applies to the tiered data offerings: that's another reason to ensure that these usage meters are accurate. Who's checking this? No one I'll bet... Why would they?

All the more reason for the FTC to make AT&T come clean on this.

As for the FCC:
http://www.fcc.gov/complaints

The complaint has the same basis as above. AT&T is deceptively marketing an "unlimited" data plan which is throttled to useless speeds based on video evidence. You can point the FCC to the YouTube video above.

You can submit this form to the FCC online or on paper.

Teh Don Ditty
My wife just got this text the other day. She's barely over 2GB and doesn't stream any audio or video.

I agree with you. Don't take the bait. ATT is trying to force us off of unlimited, and if you go to the 3gb plan, they win.

Stick it out. The mainstream media will pick up this and ATT will at least be forced to be transparent about a limit (ala T-Mobile) prior to throttling. It will happen. They can't keep this silly little game up much longer without the network news / newspapers publicizing it for the world to see.

If you go to a metered plan, you're done forever with unlimited. I'd rather grapple with the threats for now. At the least, ATT will have to give us 3 gigs prior to throttling since we are paying $30 (the price for the 3gig plan) anyway.

ATT will be caught at this sooner than later. And I bet the FCC is interested in their current practice already...

They are just testing the waters to see how their dartboard 5% approach will save bandwidth. Congrats, ATT. You've managed to both confuse and piss off your most loyal customers in a matter of months. Bravo!

Do not give in to #AT&TFail attempts to make you switch.
As long as people complain and make noise, it will put the spot light on AT&T and their unfair practices.
Score: 4 Votes (Like | Disagree)
Read All Comments

Tuesday October 4, 2022 12:09 pm PDT by Juli Clover
Apple today released updated firmware for the MagSafe Charger that is designed to work with the iPhone 12 and later and the AirPods Pro 2. The new firmware is version 10M1821, up from the prior 10M229 firmware. Note that in the Settings app, you'll see a different version number than the firmware number, with the update displayed as version 255.0.0.0 (the prior firmware was 247.0.0.0). The...
Read Full Article • 133 comments