This update enables Lion Recovery from an Internet connection on MacBook Air (Late 2010) models and addresses an issue where the system could restart if the power button is pressed immediately after waking from deep sleep.

This update enables Lion Recovery from an Internet connection on iMac (Mid 2010) models.

Apple introduced Lion Internet Recovery on new MacBook Air and Mac mini models introduced last July alongside OS X Lion itself. The feature adds a minimal bootable install onto a machine's firmware to allow it to connect the Internet and download the full Lion operating system for installation. 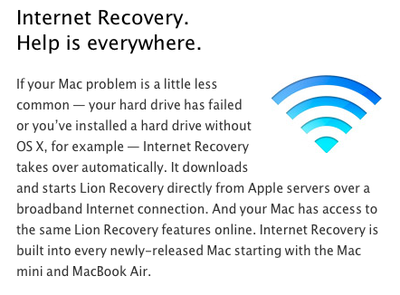 The company has extended the Lion Internet Recovery feature to a number of older Mac models over time, with the most recent addition coming two weeks ago and adding support for the Mid-2010 versions of the 13-inch MacBook Pro, white MacBook, and Mac mini. One notable exception is the Mac Pro, which has yet to see even the currently-shipping models support Lion Internet Recovery.

Tower-Union
Hey Apple, while your releasing EFI updates, could you release one for my 1,1 Mac Pro? You know, the one you told me was a 64 bit computer, and then admitted years later can't actually run a 64 bit OS? :(
Score: 8 Votes (Like | Disagree)

I don't think you could back it up even if you tried. Final Cut X aside, because that's an anomaly (one of which Apple is improving).

You won't be able to, but try.

For those wondering why AAPL seems to be foregoing OS X as there is certainly more focus on the iOS/iDevice/Consumer market, I have to wonder:

Why does it have to be one or the other?

AAPL made a good deal of money when Jobs returned. NeXT/OS X, PowerMac's, an excellent CCFL LCD (more than one stripped down 27" LED LCD iMac panel?! NO WAY! /sarcasm) and catered a great deal to the professional market, creative or otherwise.

Then Jobs bought "Shake," discontinued it while announcing to a room of studio professionals that their opinion will no longer be warranted. The years went by w/ Jobs running AAPL, cutting out accessory products and focusing on desktops and the iPod. Profits built a strong cash reserve that fed R&D into projects such as the iPad (which came first around 2004 before the iPhone in 2007) and the iPhone in '07 exploded AAPL into a new market. New iPhone owners got a taste of AAPL and MacBook's took off (mostly for students) and iMac's. Soon OS X began taking a backseat to iOS, power systems such as the PowerMac G5 was replaced with the Intel switch in 2006, tacking on almost $1k in Xeon based work stations resulting in businesses holding off on hardware upgrades due to cost. The 3 CCFL LCD's were cut, and for years weren't updated until a stripped down 24" iMac LED LCD panel and now 27" iMac panel (most likely for cost effectiveness). XServe dropped, Lion begins the bridge of iOS/OS X GUI and OpenGL support is still lagging - I could go on. This all points to AAPL ditching professional grade systems to cater to the consumer (mobile) market (Apple Computers switched to Apple Electronics, Inc.).

With $80+ Billion in cash, why does it have to be the consumer market or the professional "power" market? Why can't AAPL revamp the professional market as it did with the consumer market? Working in communications, the quantity of businesses may not compare to the quantity of consumers, but when ONE business (studio houses, photographers who primarily used AAPL displays with PowerMac's as they required little/no configuring with Spyder's, etc) has $50k, $100k or even more on updates for software licenses and hardware, that adds up to quite a bit.

I have used Mac's since 2002, almost a decade this Fall, and I still use Windows as it truly isn't a bad OS (MS just needs to code a system for a myriad of hardware combinations and third party drivers which would be a nightmare, I'm surprised it works as well as it does). I'm on my fifth Mac (2010 Mac Pro), with 2x 24" LED LCD's. I could not get my work done on another system, esp given the training it would require. If AAPL continues in this direction, my work and life will be further impacted in an already struggling economy. This frightens those of us who depend on OS X for our livelihood.


Yes, Apple has been slowly neglecting the professional market, not because they have to but because they chose to do so. Ten years ago AAPL was pretty much a standard with the creative industry, PowerMac's combined with their tuned 20/23/30" CCFL LCD's, Final Cut Pro was (and discounting X, 7 still is) a top notch professional film editing suite. Having been an ADC member since 10.3, Lion is the first time AAPL lowered membership from hundred's of dollars to just $99 in order to entice consumer feedback just as in the iOS ADC. Additionally, OS X beta's came almost bi-weekly, required complete reinstalls from a burned image, and until Lion AAPL had desktop features such as ZFS support in one of their Snow Leopard beta's and didn't drop needed API's and soon sandboxing. It's been discussed at length, but AAPL is pushing iOS and iDevices. Period. If they wanted to create a prosumer market as some have claimed then Final Cut Pro X should have been made for that market and FCP7 should have been revamped as a robust 64-bit professional product. There is no way I can do my work on a top of the line iMac, heck somedays having 2 displays isn't enough. The need isn't gone, it's there, believe me, however those of us who make our living with desktop power stations are slowly being forced into other platforms, applications and thus spending more money and time in training. Businesses don't feel comfortable investing in AAPL any longer as such long term investments aren't practical given AAPL's track record. I don't like it, but it seems to be the reality.
Score: 7 Votes (Like | Disagree)

cvaldes
I don't see what's such a big deal about Lion Internet Recovery being available to such-and-such machine.

This is the third tier solution.

When Lion came out, I created a Lion installation DVD following the simple instructions that came out on numerous web sites. I installed Lion on two machines with that disc.

Lacking a disc, the second method would be booting from a Lion recovery partition and reinstalling the operating system, with extra pieces being downloaded from the Internet.

Lion Internet Recovery would be for those who really have nothing.

Heck, I have two Macs running Lion and both systems are deliberately formatted so there is no recovery partition. If I need to reinstall Lion, I'll just toss my homemade Lion install DVD into a DVD player (I have a cheapo external USB one that will work on both Macs). The hell if I'm downloading the OS again over the Internet.
Score: 5 Votes (Like | Disagree)

Because Apple truly does not care about Pro customers anymore. Not trolling... just speaking the truth.

Pro customers don't need Lion Recovery. They can fix their OS themselves. I'd actually not want Lion messing with my partitions.
Score: 5 Votes (Like | Disagree)

I don't think you could back it up even if you tried. Final Cut X aside, because that's an anomaly (one of which Apple is improving).

You won't be able to, but try.

Because Apple truly does not care about Pro customers anymore. Not trolling... just speaking the truth.

The Dumbing down of Apple has been going on for a bit now. The day we had to buy minitors from DELL for the studio I gave up.

regardless you do not want this anyway - this is for someone who can wait to get a Station back up and running - not someone with deadlines ;)
Score: 4 Votes (Like | Disagree)
Read All Comments