Monday February 6, 2012 7:01 am PST by Eric Slivka
The Verge reports that Best Buy has been surveying some of its customers on proposed products and services, with the company including a description of a 42-inch "Apple HDTV" priced at $1499. The listing is undoubtedly simply a concept dreamed up by Best Buy to help gauge interest in such an offering, but provides an interesting perspective on what the major electronics retailer might be hoping for and what it thinks its customers would want in an Apple television set.

Be one of the first to get the all new 42" Apple HDTV at Best Buy for $1499. Apple finally reinvents what a TV can do:

- 42" 1080p LED flat panel display
- Incorporates Apple's operating system (iOS) found in its current Apple TV set top box which allows you to purchase and stream movies and other entertainment from the Internet
- Download and use apps from the App Store. Can you imagine playing Angry Birds on a big screen in your living room?
- Supports Apple's new iCloud service for storing your movies, TV shows, and music content that you've purchased from iTunes and beam them to your Apple HDTV.
- Use your iPad or iPhone as a remote control, and do everything from controlling your TV, to purchasing new shows and swapping content between your Apple devices and the iCloud service.
- Built-in convenience with built in iSight camera and microphone for Skype.
- In addition to iTunes, stream content from popular sites such as Netflix, YouTube, and flickr.
- Available for $1499

The promotional text makes no mention of Siri or voice control, which has been rumored to be one of the device's key revolutionary features following Steve Jobs' revelation that he had "finally cracked" how to reshape the way people interact with their television sets. 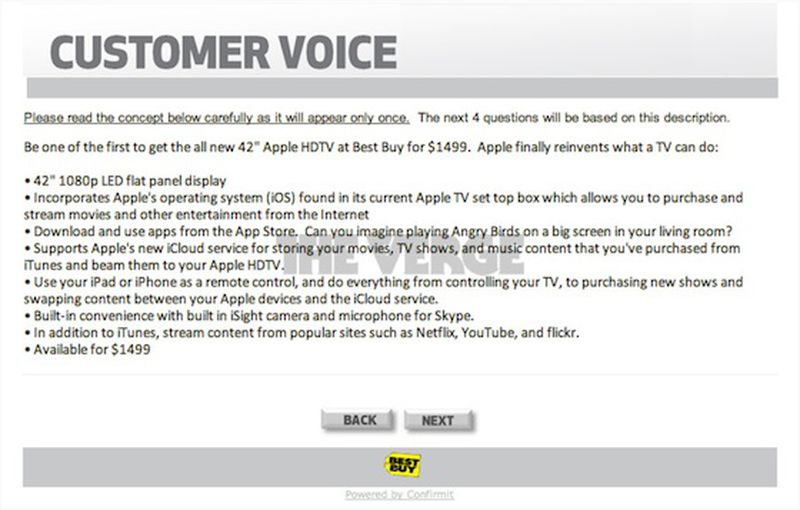 Best Buy's survey questions on the proposed Apple HDTV go on to assess respondents' level of interest in purchasing the product, whether they believe it is new and different and whether it would solve a problem or fulfill a need for them.

ajvizzgamer101
There wouldn't be Skype it would be FaceTime only.
Rating: 18 Votes

These questions were, quite obviously, not written by a fanboy. Lololol.
Rating: 13 Votes

Will it have 3D. Hopefully Apple have cracked 3D tv with no glasses?


3D is a dead-end trend. I'm sure Apple realizes this.
Rating: 12 Votes

skier777
Apple will find a way to sue best buy over this.
Rating: 9 Votes

bushido
the biggest question of all ... will it even support hdmi so i can plug in my BLU RAY PLAYER!

i wouldnt be surprised if apple doesnt allow it and will call it "revolutionary and easy to use - no need to plug any hardware in, you can stream everything from the ITUNES STORE" (more money for apple)
Rating: 6 Votes


It's true that highest end Samsung you've cherry picked retails for $1499. But what you leave out is that the MSRP for televisions is not the price that the vast majority pay for those televisions. That TV is barely available yet, so retail is still high but several hundred dollars below MSRP (already): http://www.leiberts.com/temp/Samsung-UN40D6500VF-NEW-40-Class-400-Diag-LED-6500-Series-TV.asp?utm_source=googlebase&utm_medium=comparsionshopping&aff=5112

The very best rated Samsung 40" that has been out for a while to gauge retail pricing (normalized) is model Samsung LN40D630 which is available for as little as $649 though it's MSRP was much higher.

The point being: it's easy to start cherry picking MSRP's to justify a hypothetical price for an Apple product. But, if that would turn out to be Apple's price, THAT would be the price, probably until the next generation Apple Television is rolled out. I bet hardly anyone pays that $1499 for that Samsung you identified. In fact, I bet within 30-60 days of it being available in lots of retail stores, it's average price will be about $1000.

Furthermore, if THAT Samsung is representative of the quality of 42" we should expect from Apple, and if we can believe that Samsung's MSRP you reference is not THE price that most will pay for it, why not just buy THAT quality Samsung plus $100 :apple:TV to get the exact same Apple software experience and save a few hundred dollars?

OR, why not buy a bigger HDTV at that high-quality level plus an :apple:TV for about the same as Apple's 42" HDTV with :apple:TV built in (plus an apparent requirement for an iPhone or iPad to act as the remote... or main remote)?

These are the kinds of issues that make an Apple Television NOT like Apple innovations in computers, music players, phones & tablets. Theoretically, the software that makes each of those innovations special is not necessarily going to be similarly- AND EXCLUSIVELY- available only within this hypothetical television. Thus, the buyers will face paying up for an Apple branded hardware + software combination or paying less (or getting more) with someone else's television + $100 :apple:TV3. OR, just spending the $100 and getting the exact same software benefits on the HDTV they already own.
Rating: 5 Votes

As has been posted over and over, there must be something more to an Apple Television than just software-based advantages that could be packaged in a $99 set-top box. Siri can be in a next-gen :apple:TV. The cable killer video subscription package can be delivered to ANY television in a next-gen :apple:TV. If there is a hypothetical HDTV coming from Apple, it needs something more than just the software... assuming that the same software will be delivered in a next-gen :apple:TV (that will then turn ANY television into one that can have the EXACT same software-based experience as this one with an Apple logo on it. A next-gen :apple:TV also facilitates users getting to choose whatever type of TV they want (LCD vs. LED vs. Plasma vs. DSP), whatever SIZE they want, whatever colors, shapes, remote type, what input ports they want/need, what price they want, etc.

For those shocked at BB's guess at an Apple price, please note: BB is also implying that THE remote for this device is an iPhone or an iPad. While many of us here might have one or the other so we don't see that as an expensive asterisk ("remote not included; uses an iPhone or iPad as remote"), the mass market will not necessarily view this the same way.

And keep in mind that even if you believe the mass market for this television is likely to already have at least 1 iPhone or iPad in the household, those mobile devices would then need to be left at home when their owner hits the road... except in cases where that owner lives alone. Else, the rest of the family will be pretty unhappy when someone takes the TV controller with them when they leave the home.

"But apple will include a simple remote too". Great! Then the person who took the "good" remote with them will deal with the unhappy family. If an iPad or iPhone end up as the principle remote for this hypothetical device, not only does that increase the total cost by the cost of those iDevices but it also almost demands that one of those get dedicated to being the IMmobile iDevice to be left at home at all times.

This Apple Television rumor is such a mess in so many ways.
Rating: 5 Votes