Back in late December, reports surfaced indicating that Foxconn was planning a major expansion of its iPhone production capabilities in Zhengzhou, China, with the company reportedly investing $1.1 billion and working with the Chinese government to recruit 100,000 new workers to the facility. 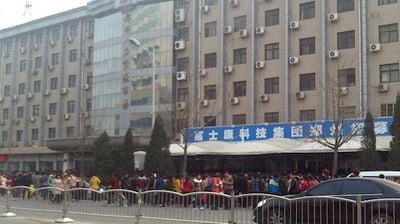 M.I.C gadget now reports that the hiring notices have gone out and thousands of prospective employees have lined up to apply for the positions.

On the 30th of January, thousands of hopefuls stood for hours outside a labor agency located in the Chinese city of Zhengzhou, the largest city of Henan province in north-central China. The lines stretched more than 200 meters along the road, and the people who were waiting in line with their applications just hope to get a job at Foxconn, as the electronics contracting giant ramps up its iPhone production at Zhengzhou plant.

The report cites articles from the Chinese media noting that many of the applicants have prior work experience, with some of them seeking to transfer from Foxconn's other facilities in southern China to be closer to home.

Apple is of course in the middle of booming iPhone 4S sales following the device's launch last October and is now turning its attention to the rapidly-growing Chinese market where the device launched on China Unicom earlier this month and is expected to launch on China Telecom as soon as late next month. The company is obviously also looking ahead to the next-generation iPhone hardware that most expect will debut later this year.

Foxconn and Apple have come under increasing scrutiny over the treatment of employees in Apple's supply chain, with Foxconn being the highest-profile target due to its employment of hundreds of thousands of workers focused on manufacturing Apple products. Apple CEO Tim Cook has expressed concern over some of the allegations presented in recent media reports while also pointing to the company's continuing efforts on the workers' rights front including ongoing audits and outside monitoring of workplace conditions.

thewitt
The saddest thing about this is the posts by people here who have NO CLUE about anything at Foxconn whatsoever, and only spew the liberal talking points.

I've been there. Seen the working conditions. Spoken with employees.

It's nothing like the bleeding heart hypocrites who send in their articles and commentary would have you believe.

China is a manufacturing giant, with conditions that are not only good for workers today, but are improving all the time.

You want to build product in the US again? You could learn something from a visit to China.
Score: 24 Votes (Like | Disagree)

Do you own any iWhatevers?

Or any electronics at all? Telephones and computers (especially non-disposable ones that go in a landfill after 24 months) are indeed “luxury” items, but they’re not just from Apple. They’re from every electronics maker. Microsoft/Xbox was in a Foxconn suicide story a few weeks ago, but that’s been forgotten...

The world is a mess, China included, and these issues can’t be ignored. But they most certainly can’t be pinned on Apple: doing that gives a free pass to all the companies who, unlike Apple, are not THE best in the industry at watchdogging their Chinese partners. Apple should keep improving, and clearly intends to... but at the same time, everyone else needs to catch up to how “good” Apple is!

Either boycott ALL electronics from China and equivalent places (I strongly respect that choice) or boycott all except those from the best company in that regard: Apple.
Score: 20 Votes (Like | Disagree)

Ryth
I didn't know "Slaves" had to line-up/apply for jobs...

Sounds like these people want the jobs and are HOPING they even get one of the positions....so lets stop with the slave labor stuff.
Score: 18 Votes (Like | Disagree)

I find it strange that Foxconn (& Apple) are singled-out so much. It's not as if China had a great record of employee rights before Foxconn started supplying Apple.


Why? Because everyone's a human rights activist...as they line up to get their iPhones every year...:rolleyes:
Score: 18 Votes (Like | Disagree)

shompa
Where are all Apple employes that force Chinese people into slave labour in the picture?
Score: 14 Votes (Like | Disagree)

DTphonehome
What?! Don't these unemployed, unskilled, poverty-stricken peasant workers read the New York Times?! Don't they know Foxconn is an AWFUL place to work? Hope they all left comprehensive wills and have large life-insurance policies!