Brazilian newspaper Folha reports [Google translation] that the Brazilian government has officially approved tax incentives that will allow Foxconn to begin producing iPads in the country. Interministerial Ordinance #34, signed on Monday and published in Brazil's official register today, specifically provides for a reduction in or exemption from certain taxes associated with the production of touchscreen tablet devices lacking a keyboard and weighing less than 750 grams.

According to ministerial decree 34 published Wednesday in the "Official Gazette", the company will be entitled to the benefits provided for in Decree 5906 of September 2006.

The determination provides for exemption or reduction of the IPI (Excise Tax), PIS and Cofins for companies investing in research and development of technology products.

The iPad 2 of course fits within those specifications, weighing in at just over 600 grams with only slight variation among the various models. The ordinance also permits the production of accessories, cables, power supplies and manuals associated with the allowed tablet devices. While the ordinance applies generically to tablet devices, it has clearly been written to support Foxconn's plans for the iPad.

Last April, Foxconn announced a major push to bring iPad production to Brazil, but the company's efforts were slowed as it negotiated with government officials over tax breaks and other issues. As recently as October the company had signaled its intention to begin production by December, and while the company has missed that target it now appears ready to move forward. 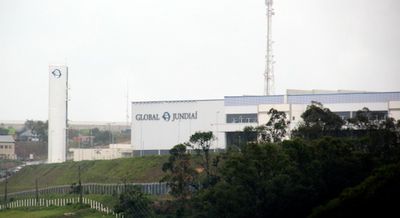 Foxconn's Brazilian iPhone and iPad factory (Source: Cult of Mac)
The launch of iPad production in Brazil comes at a key time for Apple, as CEO Tim Cook noted just yesterday during the company's earnings conference call that Brazil is its next area of emphasis after China among the "BRIC" countries with newly advanced economies. Russia and India are the other two countries in that grouping and Cook acknowledged that Apple has begun to "go deeper into Brazil" as its next target, although he cautioned against any expectations of Apple retail stores arriving in the country over the near term.

High import taxes on foreign-made goods have prevented Apple from making significant inroads in Brazil, with iPad pricing currently starting at the equivalent of US$925 for the 16 GB Wi-Fi iPad 2. With Foxconn moving iPad production to Brazil under the new tax incentives, Apple should be able to offer more competitive pricing on the device as production ramps up. Photos of a Brazilian-made 8 GB iPhone 4 showed up in late November, suggesting that Foxconn is also ramping up domestic production of new iPhone devices for Brazilian customers.

Now The US Government should start tempting Apple to do more in the USA with tax incentives.


I think that, with a gross margin of 44.7 percent, it wouldn't hurt if Apple paid some taxes.
Score: 15 Votes (Like | Disagree)

entropys
Macduke, the price of an iPad in Brazil would have as its base point the basic world price of an iPad. Like every other country, this will vary according to local selling cost factors. So, whatever the price in Brazil, it will have nothing to do with how much Yanks pay for an iPad.

Brazil is doing what a lot of countries have tried over the years, placing massive tariffs on imported manufactured goods in an attempt to create a local industry. All that happens is that the international producer might set up a local assembly shop of (mostly) imported parts to avoid the taxes, and pockets higher margins in economic rent as even without the tariff higher than world prices can still be charged (there is no competition from imports to keep them honest). They can even get away with a lesser product because the tariff wall protects them from the higher cost to make latest tech (note Brazil currently makes iPhone 4, not 4S).

This strategy never works of course. If the prop of the tariff wall is ever reduced, the local arm of the businesses' first strategy is to squeal a lot, seeking a reinstatement of the tariff or government subsidies instead. And of course, the second strategy is to wind up local operations as the local business structure is uncompetitive with imports, molly coddled as it was behind the tariff walls. In the end all that happens is that the local consumer has over the years paid billions of dollars extra for products that are always just one step behind in a technological sense.

I know this because my own country pursued this exact same strategy sixty years ago, promising a glorious future in manufacturing, but really only leading to a brake on living standards that reached its lowest point in the seventies which only began to be reversed when tariffs started to be cut back. The biggest beneficicairy of our tariff wall was the car industry, which to this day constantly attempts to blackmail government for special treatment. Constantly bleats like a calf being weaned.
Score: 6 Votes (Like | Disagree)

This is great news!

I don't see why this is great news - economically speaking. It's great for Brazilians, sure, but still pretty bad for us back in America. The reason why Brazil has such high import taxes is precisely for this - to bring companies into the country. As its employment and education numbers rise, and the number of people living in misery fall - almost 30 million in the past decade have joined the middle class - the purchasing power increases. Therefore if companies want to profit from the country joining the developed world - they will have to go and manufacture there. Three years ago the price of a macbook pro in Brazil was going for $13,000 reals - an estimated $7,000 dollars.

Perhaps we ought to do this here, place heavy import taxes on products manufactured in China, India, Brazil, etc, raising the price of the simplest macbook pro and other similar computers to $2,000 or more and we'll see apple moving back to manufacture in the US. That's what the government should have done 10 years ago when manufacturing jobs started disappearing as a result of free trade signed in the 90s, and not ask Jobs "what can be done to bring Apple back to the US?"
Score: 6 Votes (Like | Disagree)

Now The US Government should start tempting Apple to do more in the USA with tax incentives.

Horse Manure. Spend a few seconds on research next time. Brazil got that factory SIMPLY BECAUSE Brazil has a 49% tariff on all imported electronic goods, and it was cheaper for Foxconn to built a plant and hire local labor AT A LIVING WAGE than to ship and pay that tariff.
But here, no, we eliminated all tariffs that protected US workers, instead giving tax breaks to Apple and every other manufacturer that sent jobs overseas, thus the ongoing destruction of the middle class here. I am TIRED of subsidizing Apple's goddam business. Recently I saw that if iPads were made here they would be about 20% more expensive. I'd feel better paying that knowing Apple was doing the right thing by supporting OUR workforce and OUR country instead of being part and parcel to ****ing slave labor, plus the PR would be phenomenal for them. But no, the shareholders rule, and Apple will horde that 97BN like Uncle Scrooge.
Score: 5 Votes (Like | Disagree)

I think some of the responses to this thread points out the issue with America/Americans and their problems with unemployment today. It seems that for some people, instead of looking internally to see how America can become more competitive in the global market, they ask Apple to find a 'solution' for them which makes Apple less profitable.

It is like telling someone making $60K a year that they can probably make due with $30K so they should take a $30K salary so the company can hire someone else for $30K. There, unemployment solved. Why don't people do this?
Score: 4 Votes (Like | Disagree)

katewes
If Tim Cook is such a genius at creative manufacturing, he ought to find a way - when others say it is impossible - to bring back manufacturing to the United States. Experiment. Use automation. Find ways to make things more efficient. Right now, even as a non-American, it sickens me to see Apple's growing pile of cash, and their insistence that Apple cannot manufacture in the U.S.A.

As I see it, if Apple has $99 billion in the bank from manufacturing outside the U.S.A. - wouldn't they still be happy if it had been, say, $50 billion with manufacturing in America. There comes a point there having less profit, but still pretty good profit, is actually better if it brings back not just retail jobs but the whole manufacturing process to America. It's not just jobs, but the technology, know-how.

Germany has maintained its manufacturing base, and it's only corporate greed in America that has prevented it from doing what Germany has done.

American people, think. Imagine this going on for another 30 years, the continual transferring of manufacturing overseas, simply because of corporate greed. America will become another basket-case economy like Russia with its corruption.

I love Apple products, and have for decades - but I loathe Apple's corporate greed.

For me, Apple's grovelling and dry-swimming in its pile of cash is the epitome of everything that is sick in corporate America - the pursuit of cash over any other principle in life.
Score: 4 Votes (Like | Disagree)
Read All Comments