Roundup of Analyst Expectations Ahead of Apple's Q1 2012 Earnings Call

Philip Elmer-Dewitt has assembled his list of analyst expectations ahead of Apple's quarterly earnings report Tuesday afternoon. The list includes estimates from 17 "independent" analysts and 34 "affiliated" analysts who work for large investment houses or research organizations.

As usual, the independent analysts are much more bullish than the affiliated analysts. The independent consensus expects earnings per share (EPS) of $12.01 on revenue of $43.14 billion. The institutional consensus is EPS of $10.19 on $39.23 billion in revenue. 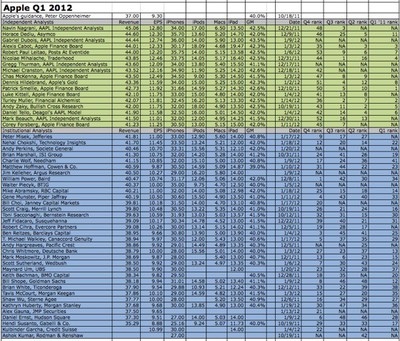 Last quarter Apple announced it had broken $100 billion in sales for fiscal 2011, the first time it had breached that figure, and posted $6.62 billion in profit on revenue of $28.27 billion. For the first fiscal quarter of 2012, Apple has issued guidance of $37 billion in revenue with profits of $9.30 per diluted share.

Apple's best quarter ever was fiscal Q311 when it posted $7.31 billion in profit on sales of $28.57 billion. It appears Apple will solidly beat those numbers this quarter, posting its best results ever.

Apple will announce its earnings for the first fiscal quarter of 2012 (fourth calendar quarter of 2011) and host a conference call regarding the release on Tuesday January 24th at 5:00 PM Eastern / 2:00 PM Pacific. The earnings release itself typically comes in around 4:30 PM Eastern.

Simple math shows that Apple will crush estimates this quarter. Looks like the consensus for iPhone unit sales is about 30 million. My estimate is 35.5 million. This is based on simple math. Here are some notes I made a couple of days ago.


* In Q3 Verizon sold 2 million iphones while Apple sold a total of over 17 million. Therefore, Verizon's iPhone sales represented 12% of total iPhone sales. In Q4 Verizon sold 4.2 million. 4.2 million is 12% of 35 million--pointing to 35 million iPhone sales.
* Apple recorded 1.7 million iPhone sales when the iPhone 4 was launched. This represents about 12% of total sales for that quarter. This year Apple recorded over 4 million iPhone sales during the opening weekend of the iPhone 4S. 4 million is 12% of 34 million--pointing to 34 million iPhone sales.
* This quarter an additional carrier was added in the United States: Sprint.
* Sprint declared its sales record was broken by 1PM EST on iPhone 4S launch day.
* AT&T was on track to double record iPhone activations in a single day for iPhone 4S launch--meaning double the day they released the iPhone 4. So if Apple's iPhone sales doubled for the 4S quarter just as they did with the iPhone 4 quarter, this is pointing to 34 million iPhone sales this quarter.
* There is an extra week in Q4 compared with Q3.
* The iPhone 4S launch falls in a quarter that leads right up to Christmas, including all holiday sales. The iPhone 4 was released in the summer. It is very likely that iPhone 4S sales kept more momentum than the iPhone 4 due to the holidays.
* Tim Cook's (Apple CEO) words should not be taken lightly: this marks "our fastest iPhone rollout ever"; "Customer response to products in China has been off the charts"; "we--in our wildest dreams, we couldn't have gotten off to a start as great as we have on the 4S."
* Apple has lower priced and more competitive iPhones available for purchase than it did when the iPhone 4 launched.
* Apple's Asia-Pacific segment is exploding and difficult for analysts to keep up with.
Score: 4 Votes (Like | Disagree)

fins831
Who wants to play 'what the stock will end at' game for Weds?
Score: 2 Votes (Like | Disagree)

Slurpy2k8
I can't even wrap my mind around 35million phones. Damn.
Wasn't that long ago that 5 million iPhones per quarter was incredibly impressive.
Score: 1 Votes (Like | Disagree)

You see this is the kind of fanboying which should be left at Macdailynews.


I don't understand the point you are trying to make?
Score: 1 Votes (Like | Disagree)

Wednesday May 12, 2021 10:03 am PDT by Juli Clover
Apple's M1 iMacs are set to start delivering to customers next week, and ahead of the official launch day, benchmarks for the machines have been showing up on Geekbench, likely from reviewers who are testing them. It will come as no surprise that M1 iMac benchmarks are right on par with benchmarks for the M1 MacBook Pro, MacBook Air, and Mac mini, coming in with an average single-core score...
Read Full Article • 287 comments