AppleInsider reports that it received a tip earlier this week claiming that Apple's digital textbook project rumored for unveiling tomorrow has been developed internally under the code name "Bliss". The source also indicated that the project was inspired by Apple board member Al Gore's Our Choice e-book app focused on global climate change. 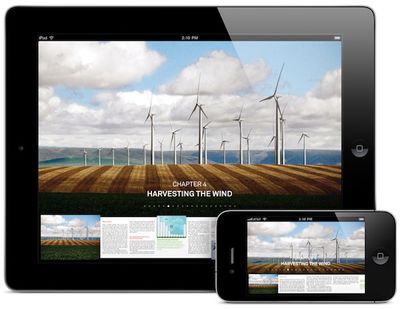 Al Gore's Our Choice app
Some of the source's information, including details on Roger Rosner's role in the project, was corroborated yesterday by The Wall Street Journal, increasing confidence in the remainder of the claims.

The person who contacted AppleInsider indicated that Apple's Internet software chief, Eddy Cue, is responsible for the distribution side of the new e-textbook initiative. But Rosner is said to be in charge of development of the editor used to create digital textbooks, as well as the reading software that will allow students and teachers to view the files.

The person said the internal code-name for the project is "Bliss," and said the software will allow publishers to make textbooks more interactive.

Our Choice, which was selected for an Apple Design Award at last year's Worldwide Developers Conference, is an immersive, interactive app produced by Push Pop Press. The firm founded by former Apple engineers had planned to expand its efforts in the interactive book-as-app market with additional titles, but the plan was cut short when Facebook acquired the company last year.

Global warming is a hoax pushed for political gain.


WTF is this ignorant crap?
Score: 17 Votes (Like | Disagree)

Mudbug
I for one am SOOOOOO ready for a content creation tool for creating immersive book experiences on the iPad that doesn't require coding.
Score: 12 Votes (Like | Disagree)

Anything to do with Al Gore is doomed for failure.

Has anyone performed any studies on the effect lcd screens have on young eyes? :confused:

I know I 've had to put glasses at 33 from computer use and know a lot of friends who had their eyesight hurt after extensive computer use.

As much as I feel excited about this, I have to be reserved about it too...


My understanding is that computers hurt the eyes due to the fact that you are constantly focusing on an object at the same distance away. As people age, they become far-sighted because their eyes become less flexible which limits their ability to focus on things that are close to them (thus requiring reading glasses). You can help your eyes during computer use by occasionally focusing on things far away and then looking back at the computer again.

I've never heard of any studies that say that LCD screens hurt the eyes.

If the above is correct, then there should be no difference between reading a book and reading on a computer screen.

He's touched McDonalds once or twice.

All depends on the period of time you are measuring temperatures. And there is no proof that it's man made or that anything can actually be done about it. That is why it can be called a hoax.


This is getting off-topic, but I would like to add that calling something a "hoax" is saying that the scientists are deliberately trying to mis-lead people. You may or may not agree with their conclusions, but calling global warming a hoax is going too far.
Score: 10 Votes (Like | Disagree)

pheenix11
Are these digital textbooks going to be significantly cheaper to make up for the fact that you can't resell them at the end of the semester?
Score: 9 Votes (Like | Disagree)
Read All Comments