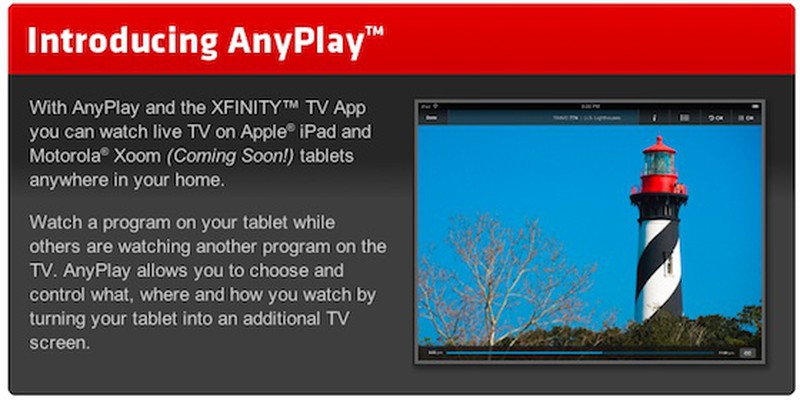 Comcast today announced that it has begun rolling the AnyPlay service out to its customers, beginning with Xfinity HD Triple Play customers in Denver and Nashville. More markets will be added in the coming months, with the service initially launching for the iPad only but joined in the future by the Motorola Xoom.

Here's how it works...the AnyPlay device works the same as any other set top box in the home, but instead of delivering the incoming channel lineup to a television, AnyPlay delivers the lineup to the Wi-Fi router on the home network. The router then distributes the secure video signal to the iPad or Xoom over your home's wireless network. So as long as your tablet is within range of the home wireless router, you can turn it into another television screen.

The AnyPlay service is accessed via the company's existing Xfinity TV app for the iPad, which also offers thousands of hours of on demand movies and TV shows available for viewing both inside and outside of the home.


Not happening any time soon


Actually they said the Xoom version was coming soon (go back and read the article). What puzzles me is "why Xoom?" Is the Motorola Xoom the best selling Android tablet? Hasn't the Transformer overtaken it? Does running on the Xoom represent some least-common-denominator benchmark that means your app is likely to run on other Android tablets? It seems to me that there have been many many Android tablets since the Xoom and that the Xoom never sold that many units anyway. If I were them, I would advertise "Android coming soon".
Score: 2 Votes (Like | Disagree)

IzzyJG99
Brighthouse Cable has one of these applications. It's nice, but has a bit of hook to it..

1.) You have to be in your home.
2.) Have to have internet provided through Brighthouse.
3.) You don't get all the channels.

Comcast it seems will be doing the same, which is to be expected. Annoying, but tolerable as they may be. It's enjoyable for watching TV in bed.
Score: 2 Votes (Like | Disagree)

rsands1
I'm thinking the fine print is something like this....

Or something along those lines : )
Score: 1 Votes (Like | Disagree)

doubletap
So you VPN back into your home's network from afar and you get live tv anywhere in the world?

icrew
So really it's just a Slingbox, but not as good?
Score: 1 Votes (Like | Disagree)

<gripe>
I am one of the few that opts to replace the Motorola DVR with a TiVo. When you do this you lose the On-Demand and Pay-Per-View capability, but you gain control over your own equipement (as far as TiVo lets you). I get to download any program and burn it to DVD or put it on my iPad.

When using the Xfinity iPad application, I can't watch anything because it doesn't see a Motorola or other lesser cable box on the network some how. I hope this upgrade solves that problem. Can't wait until they roll it out to my neighborhood. But that's the thing troubling me... Why is this rolled out region by region. It should be just a feature of their service.

I really hope Apple because a Virtual Cable Company and I can pick my show's ala-cart. My only requirement from Apple (or traditional cable companies) is that I can burn programs to offline storage. I've always been able to VCR programs, and in the 21st century, I shouldn't lose that ability.

To Add, it's an interesting concept if Apple were to get into being a Virtual Cable Company. A channel could be just a show, or it could be interest-based like Reality, Game Shows, Talk Shows, etc. It's still be an advertising based model, or pay for no commercials model. The commercial model would have Apple integrating the iAd service into television now, replacing the networks commercial stream. Basically, Apple pays the content providers for each show then offsets the cost with either premium pricing (no ads) or their own add stream, which now goes mainstream, not just in-App on iPhone/iPad/iPod. This would change the game in the advertising world. iAd will be major business for Apple.
</gripe>
Score: 1 Votes (Like | Disagree)
Read All Comments