Comcast, the United States' largest cable and internet provider, is working on a television streaming solution for iPads, to compete with Cablevision and Time Warner. The streaming product was announced earlier this year, but details haven't been released until now.

The product, called AnyPlay, allows Comcast subscribers to view live television on their iPad as long as it's connected to their home network; users must have a special Motorola box which, apparently, takes the live cable stream and sends it directly to the Xfinity TV iPad app over a local wireless network. The service won't work over Wi-Fi from other locations, or via 3G.

Update: Engadget believes the Motorola Televation cable TV-to-IPTV box is what Comcast will be using for AnyPlay. 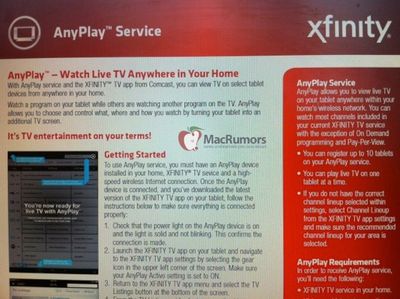 Other solutions, like Time Warner's, stream live video over an internet connection. Comcast's AnyPlay appears to be a cable box that sends video to the iPad rather than to a television. Users can watch "most" channels included with their Xfinity TV service. Users can register up to 10 tablets, but only watch live TV on one tablet at a time.

There is no indication of release dates or availability, but AnyPlay will be available in limited markets at first, and spreading to all Comcast customers eventually.

Comcast previously used the "AnyPlay" name on an announced but never released product with Panasonic in 2008.

guru_ck
This is stupid. I don't want to watch TV on my iPad at Home, I'd turn on my television for that. And I'm definitely not replacing my Time Capsule with some craptastic Motorola Wi-Fi device.
Score: 12 Votes (Like | Disagree)

Poor choice of branding and a nearly useless service. Spend the money I send you monthly on developing a decent, flexable service that I can use when I'm away from home. THAT would add value.

The "AnyPlay" brand might be appropriate if we were able to play from "Anywhere" on "Anything" at "Anytime" but not on only one iPad at a time and only from home.

What they're apparently offering is really "OnlyPlay."

netnothing
Bravo Comcast......by requiring a box to do this, you've guaranteed yourself another source of revenue.

Meanwhile, most of the networks have their own apps for watching live or on demand as long as you're a Comcast (or other select) subscriber.

Is this really that hard?

What you'll find is that markets where someone else has the cable service, you're now able to penetrate, just like satellite, except, unlike satellite, cable, FiOS or other delivery, you don't have to pay for the dumb pipes.
Score: 4 Votes (Like | Disagree)

How does Apple fit into this? :confused:

If I need to sign in to a separate wifi network for TV, separate from the network I use to access the internet, this is going to be a no go.
Score: 4 Votes (Like | Disagree)

Tuesday October 4, 2022 3:30 am PDT by Hartley Charlton
The European Parliament today voted overwhelmingly in favor of enforcing USB-C as a common charging port across a wide range of consumer electronic devices, including the iPhone and AirPods, by the end of 2024. The proposal, known as a directive, forces all consumer electronics manufacturers who sell their products in Europe to ensure that a wide range of devices feature a USB-C port. This...
Read Full Article • 365 comments