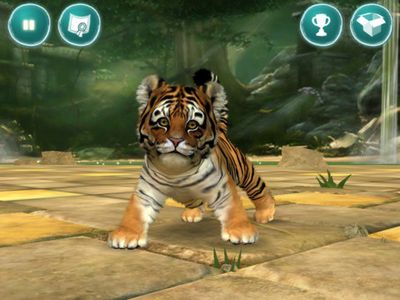 Microsoft today took a major step onto the iOS gaming platform with the release of Kinectimals. The game, which is aimed at children and involves interacting with virtual animals, debuted last year as an Xbox 360 game taking advantage of the Kinect motion-sensing control system.

This irresistible mobile experience gives you the chance to use your phone to visit the island of Lemuria and play with, care for and fall in love with your very own cub. Bring your pet with you wherever you go! If you’ve already experienced Kinectimals on Kinect for Xbox 360, your phone becomes the key to unlocking five new cubs on your console.

The release marks an interesting move for Microsoft, which has an established gaming brand with the Xbox/Kinect line and has been thought to be looking to use that leverage to promote its own Windows Phone platform. But Microsoft has been making a significant push into iOS gaming tie-ins over the past week, beginning with the My Xbox LIVE profile management app and Halo Waypoint companion app for the popular gaming franchise.

Beyond those new offerings, today's addition of Kinectimals signals an even more substantial investment in iOS by Microsoft, which has now proven willing to branch out from its own platforms to support games running directly on iOS devices.

Kinectimals is a universal iOS application for iPad, iPhone, and iPod touch, and is priced at $2.99 [App Store].

TheOrioles33
Good to see MS getting in on the action! Thanks for the XBOX app. Bring on Office!
Score: 11 Votes (Like | Disagree)

rdowns
First it's Kinectimals, then it's Windows and Office. Won't someone think of the children? :D
Score: 9 Votes (Like | Disagree)

ProVideo
Looking into that tiger's eyes one cannot ignore the deep hatred and resentment for it's owner that is present. It is more than happy to do tricks and obey the commands because it knows that one day the tables will turn in the struggle of control and life span.
Score: 7 Votes (Like | Disagree)

Microsoft is a software company. They've spent the last 30 years confusing themselves into thinking they're a 'platform company.'

That's nice and all, but it's not the only way. I sure hope this is a sign to come. I'd like to see Microsoft succeed and I think it will happen like this...by becoming the dominant software provider on OTHER platforms. They've been allergic to that in the past because they wanted to protect Windows, but those days are over. I'd love to see them branch out more.


Microsoft has been somewhat rudderless since the dancing monkey's been in charge. However, by supporting iOS Microsoft is doing two things:
1. Making their gaming platform stronger. They see iOS as a stable platform with a strong future, and therefore worth supporting. That vs. Android which is highly fractured and hard to support in a quality way. Keep in mind that a bad experience on a phone as a controller reflects badly on the XBox as well.
2. Making iOS-driven devices stronger. Stronger iOS devices mean weaker Android market, therefore a less-crowded opening for the MS mobile/metro OS whenever that straggles to market...

You may remember that initially Microsoft envisioned the PC being the center of the home entertainment stage, by releasing the XBox they signaled defeat of the PC-cetric strategy. Supporting iOS is further hardening the XBox-cetric strategy.

now give me Office on my iPad and onenote on my MacBook and I am set.


OneNote on the MacBook is already on the market. Office in the iOS devices is on the horizon.

All things come to those who stand and wait.

It's too cutesy for my taste.


I agree, but I'd buy it in an instant if the tiger cub were replaced with a dancing monkey in a sweaty blue shirt!
Score: 6 Votes (Like | Disagree)

commander.data
It's likely an acknowledgement that many XBox gamers are also iOS users. Microsoft could either ignore them or embrace them. XBox tie-ins are a way to do the latter.
Score: 6 Votes (Like | Disagree)
Read All Comments